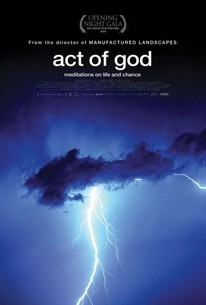 Documentarian Jennifer Baichwal helmed this reflective documentary that ponders the spiritual, emotional, and metaphysical ramifications of being struck by a lightning bolt. According to the National Weather Service, the odds of this incident befalling any given person are about one in 700,000, which makes many a survivor question why he or she fell prey to this unusual calamity; some infer a cosmic reason, some reject that possibility, but most fall somewhere in between as they feebly attempt to come to terms with it. In the film, Baichwal speaks with a number of well-known victims, including the novelist and screenwriter Paul Auster (The Music of Chance), the improv-driven prog rock guitarist Fred Frith, and others, and evaluates how the interviewees' lives forked off in new directions after a massive discharge of electricity descended from the sky and landed on them. ~ Nathan Southern, Rovi

Critic Reviews for Act of God

[Jennifer] Baichwal's point of view is not religious; in fact, the strength and beauty of her project resides in its stubborn insistence on agnostic fuzziness.

An undeniably provocative head-trip, laced with the most spectacular lightning-storm footage I've ever seen.

Neither filtered through nor structured around another artist's work, and suffers from the lack of a unifying vision, its parts greater than the whole.

The wishy-washy rotation of characters strands us in the center of the film's complex topic without much aside from useless meditation on the fierce numinousness of nature to keep us company.

Baichwal is the least judgmental of interviewers, which is a double-edged sword when the solemn testimony ("I had come to meet me") induces a barely resistible urge to laugh.

There's plenty of awe to go around, be it religious, scientific, or both, but Act of God remains stubbornly stuck in the world of abstract mysticism.

For a documentary that's ostensibly about people being struck by lightning, it's a quiet and deeply philosophical treatise, filled with subtle grace and mortal agonies, often occurring side by side.

An alluring documentary about the shocking power and mystery of lightning in human experience.

A mildly engaging documentary that feels somewhat incomplete without enough insight, revelations and thorough analysis. Ultimately, it doesn't quite find the right balance between entertaining the audience and provoking them intellectually.

Interlaces spectacular visuals with meaty chatter by various luminaries and laymen talking about life after being struck by lightning.

Thanks to filmmakers Jennifer Baichwal and Nick de Pencier, the after effects of these 1-in-700,000-odds' strikes are brought into horrifically mesmerizing view and accompanied by a music track ... that magically reinforces the storytelling.

Audience Reviews for Act of God

"Act of God" is a moderately interesting documentary that seeks to explore the differences in faith and science by talking to people who have been struck by lightning.(That's not to mention the museum in France devoted to lightning strikes.) They discuss how their lives have been changed, maybe not so much in a physical manner, but in a spiritual way. While some question why they survived and others did not, others had something along the lines of a near death experience. And as in anything, there are no easy answers.

Short on facts and long on subjective, predictable mumbo-jumbo, this one was something of a let-down. I had hoped to hear some medical testimony and to learn more about the actual strikes and what it is really like to be hit by lightening. Apparently you just black out. If anything more interesting happened, the lightning victims interviewed in the movie would have had something remotely substantial to report other than obvious BS.

Baichwal receives much critical acclaim for her films but I end up finding them dreadfully dull as cinematic experiences. Can someone show her how to make a documentary an exciting thing?

I thought it would be a movie about how being struck by lightning had changed people's lives, but it was basically about how lightning has killed some people, and it seemed more fear mongering than anything. Also, the camerawork was highly irritating: having nothing visual to show to go along with the interviews, Baichwal simply shows pictures of clouds/sky moving at various speeds complete with psychedelic effects. So irritating. I would not recommend this movie to anyone.