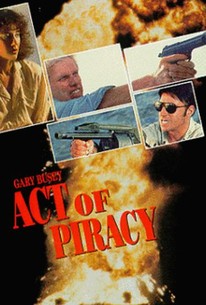 Ray Sharkey makes one of his last film appearances in 1989's Act of Piracy. Sharkey plays a contemporary buccaneer whose cutthroat gang swipes contractor Gary Busey's technologically advanced yacht. The pirates also inadvertently abduct Busey's children, who remained hidden during the siege. With no money to ransom his captive offspring, Busey undertakes his own rescue mission. Slow going until the slam-bang finale, Act of Piracy is acceptable nonthink entertainment.

Critic Reviews for Act of Piracy

There are no critic reviews yet for Act of Piracy. Keep checking Rotten Tomatoes for updates!

There are no featured reviews for Act of Piracy at this time.