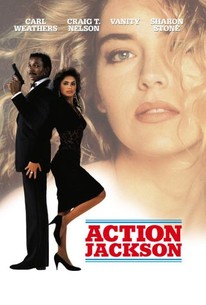 Ex-football player Carl Weathers stars in this violent action film as Detroit policeman Jericho Jackson. The dedicated but brutal cop is plunged into nefarious doings concerning a crooked industrialist (Craig T. Nelson) and his drug-addicted girlfriend (pop-singer Vanity), breaking many people's bones before solving the case. Sharon Stone stands out in a cast of genre veterans including Nicholas Worth, Sonny Landham, and Robert Davi. Heavy on the sex and violence, this film harkens back to the glory days of 1970s blaxploitation, but is a bit too mean-spirited to be as much fun. ~ Robert Firsching, Rovi

Preston Hanson
as Master of Ceremonies

Prince A. Hughes
as Edd

Nicholas Worth
as Cartier

Crashing through are several raffish characters whose acting doesn't get in the way of the stunts.

Action Jackson is a movie where some of the parts are good, but none of them fit and a lot of them stink.

One more example of an insignificant movie made to entertain those who like forceful punches and accurate shootings. [Full Review in Spanish]

[ Weathers] shows here what one had long suspected from his Rocky debut: an attractive personality with more than enough charisma to fill the screen in a worthier film than this.

It's cuckoo bananas, crazy. It's entertaining at the same time, because it's so crazy...but it is not a good movie, and I know this might be blasphemy, but Carl Weathers actually lacks a lot of charisma here...

It's just fun to talk about. Vanity is beautiful in this...it's an easy way to pass the time.

You call that 'Action'?

So, so bad, it's hardly worth mentioning.

Mindless 80's action schlock. Fun only if you already know it's junk, but dig it anyway.

I love these 80's henchmen with their black outfits, mullets and inability to shoot straight. Add to that some extremely over the top action sequences and a large piece of wood in the form of Weathers and there you have it, a perfect 80's action film. This film is your typical tough guy flick with the same kind of action as many many other classic films like 'Lethal Weapon' and 'Red Heat' etc...Funnily enough this film has a few main cast members from the Arnie vehicle 'Predator' with Landham and Duke alongside Weathers. Talking of the cast this film has a mega cast of stars/80's faces...Robert Davi, Thomas F. Wilson, Craig T. Nelson, Sharon Stone, Ed O Ross, Miguel A. Nunez Jr and the ultimate henchman Al Leong. Only guy missing here is Arnie himself. I gotta admit I never really liked this flick as it just seems like a big action vehicle wannabe and just can't quite compete with the real big boys. I think Weathers is coming off a hot streak of films where he wasn't the main lead so the film didn't rest entirely on his shoulders. Weathers is a good tough guy, looks good and talks the talk but I just don't think he's got enough swing to hold an entire blockbuster film all on his own. For me he works better with other big names to spar with (no pun intended) eg. 'Rocky' and 'Predator'. The same goes for the main bad guy played by T. Nelson, he's slimy but isn't quite evil or threatening enough. Overall its a slightly unimpressive outcome but that lively 80's buzz is hard to ignore. Bit of a hit n miss non event action flick in an already flooded genre at the time.

Average furious action of a black cop trying to nail the professional and evil gang.