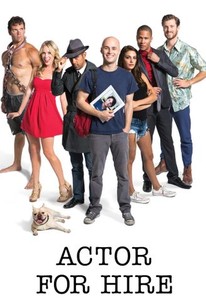 Aspiring actor Jesse thinks he's not landing parts because he's bald. After several failed auditions he decides to cover his bald head with a wig, hea back out to the auditioning chopping block and give it a fresh new go. He immediately books a small role on TV pilet "Between the Waves", giving full credit to his newly discovered persona. Between juggling his personal life, which includes a cheating girlfriend and a missing roommate to keeping a grip on his career, where he accidentally befriends a heartbroken celebrity on the rise, Jesse realizes his true desire isn't to be an actor. It's to be a movie star.

JT Alexander
as JT the Agent

Nick D'itri
as Nick the Director

Bryant Turner
as Bryant the AD/Landlord

Lance Charnow
as Lance
View All

Critic Reviews for Actor For Hire

Kudos to Mizelle for getting his vision on screen and producing a solid film.

There are no featured reviews for Actor For Hire at this time.