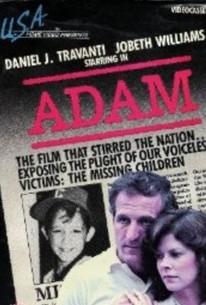 Adam is the heartbreakingly true story of the disappearance of 6-year-old Adam Walsh (John Boston) at a South Florida shopping mall. Adam's anguished parents John and Reve Walsh (Daniel J. Travanti and JoBeth Williams) turn to the FBI for help in finding their son, only to discover that the federal organization does not involve itself in such cases. As hope for Adam's return fades, the Walshes begin an organization to aid and comfort other families of missing children. The story does not end happily for Adam or his parents, but as a result of this tragedy, Congress passes the Federal Missing Children Act in 1983. This made-for-TV drama, originally telecast October 10, 1983, was followed by a sequel three years later. The real-life John Walsh later hosted the popular "reality-based" TV series America's Most Wanted.

There are no critic reviews yet for Adam. Keep checking Rotten Tomatoes for updates!

There are no featured reviews for Adam at this time.