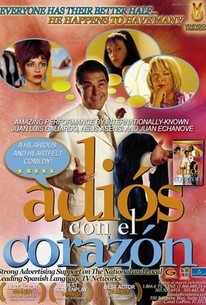 The third installment of director Jose Luis Garcia Sanchez's state-of-Spain trilogy, which began in 1995 with Whispers of Spain (and Portugal). Roguish Juan (Juan Luis Galiardo) lives by himself, eking out a dubious living from gambling money and blackmailing various women who were once his lovers, one of whom is Alicia (Teresa Gimpera). When Caty (Laura Ramos), a would-be athlete, materializes on Juan's doorstep one day claiming to be his daughter by a tryst in Havana 20 years earlier, Juan finds the order of his daily existence thrown into peril. Caty is in search of Spanish residence, and is helped in her quest by Pepe (Juan Echanove), a cop who has recently been left by Juan's other daughter Carmela (Neus Asensi) -- for Tony (Pedro Miguel Martinez), a bisexual hairdresser. The plot twists again when Juan is contacted by Alicia's husband, a sleazy crook by the name of Pozueta (Jesus Bonilla), who wants Juan to go to jail in his place. Pozueta is smitten with Caty and offers to marry her but must get a divorce in order to do so, thus arranges a deal with Juan to record Alicia in bed with her new lover. ~ Rebecca Flint Marx, Rovi

There are no critic reviews yet for Adios Con el Corazon. Keep checking Rotten Tomatoes for updates!

There are no featured reviews for Adios Con el Corazon at this time.