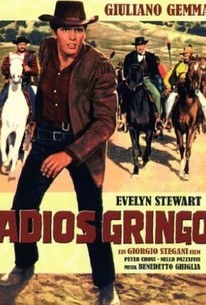 This violent Italian western feature finds a young rancher nearly lynched by angry townsfolk after he comes into possession of some stolen cattle. He escapes to seek out the man who sold him the heisted heifers. The trail leads to a young woman who has been raped by three men, one of whom is the cattle rustler, another the son of a wealthy rancher. Once the criminals know our hero is closing in, the race is on to silence the rape victim and the hero before they can identify the rapists and rustlers. Director George Finlay is better known in Italy under his real name, Georgio Stegani.

There are no critic reviews yet for Adios Gringo. Keep checking Rotten Tomatoes for updates!

There are no featured reviews for Adios Gringo at this time.