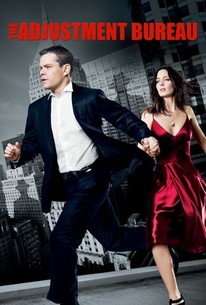 Critics Consensus: First-time writer/director George Nolfi struggles to maintain a consistent tone, but The Adjustment Bureau rises on the strong, believable chemistry of its stars.

Critics Consensus: First-time writer/director George Nolfi struggles to maintain a consistent tone, but The Adjustment Bureau rises on the strong, believable chemistry of its stars.

Critic Consensus: First-time writer/director George Nolfi struggles to maintain a consistent tone, but The Adjustment Bureau rises on the strong, believable chemistry of its stars.

On the brink of winning a seat in the U.S. Senate, ambitious politician David Norris (Damon) meets beautiful contemporary ballet dancer Elise Sellas (Emily Blunt)--a woman like none he's ever known. But just as he realizes he's falling for her, mysterious men conspire to keep the two apart. David learns he is up against the agents of Fate itself--the men of The Adjustment Bureau--who will do everything in their considerable power to prevent David and Elise from being together. In the face of overwhelming odds, he must either let her go and accept a predetermined path...or risk everything to defy Fate and be with her. Based on a short story by Philip K. Dick. -- (C) Universal Pictures

Chuck Scarborough
as Himself
View All

News & Interviews for The Adjustment Bureau

View All The Adjustment Bureau News

Critic Reviews for The Adjustment Bureau

It was a decent concept (at best) that was not supported with a good screenplay, and grew sillier by the minute. It just didn't work.

Accomplished filmmaking that features two highly attractive, talented leads, a healthy dose of sentiment, an intelligent script, and which takes you away for two hours from the quotidian worries and banalities of your regular life.

Nolfi and his colleagues make especially good use of New York, filming everywhere from the Brooklyn waterfront to the lobby of the Museum of Modern Art. It's a fresh look at a familiar city. But Nolfi drops the ball in the home stretch, and that's...

The film's chief interest isn't plumbing philosophical questions of fate, providence and autonomy but, instead, wallowing in skimpy fairy-tale romanticism.

This mind-meld of sci-fi thriller, morality play and passionate romance is worth seeing, mostly for the palpable chemistry between the lead actors.

The film's notion that true love conquers all would fall flat with the wrong leads, but Damon and Blunt possess a lovely, laid-back chemistry that allows us to believe in their union.

Not everyone will get where the film is coming from. Nevertheless, most will still be content to sit and watch where The Adjustment Bureau is ultimately going to.

The Adjustment Bureau isn't exactly faithful to its source material as much as it takes that central concept and creates another world out of it.

Paranoia, a looming, faceless authority, religion, and the true nature of individual identity, among other Philip K Dick favorites.

The Adjustment Bureau is far too long-winded and too complicated when it explains the where and why of its tangled plot to have us suspending disbelief for very long.

Audience Reviews for The Adjustment Bureau

A brilliant, thought-provoking blend of romantic thriller and science fiction developed from a simple but very well-conceived idea and with a couple of characters that are so easy to relate to. Even if only loosely based on his story, I guess Philip K. Dick would have been proud.

The Adjustment Bureau is an interesting love-drama that is powered by the chemistry of Matt Damon and Emily Blunt. The script is alternative and may not be fully comprehensive to most audiences. But the film is solid and interesting to see. 4.5/5

Star-crossed lovers are kept apart by an omniscient bureau because their perfect, fulfilling love will dampen all other desires, including their respective ambitions to attain professional success in politics and DANCE. I don't particularly buy that thesis, nor that the universe wouldn't have better things to do than keep Matt Damon and Emily Blunt apart, but the light chase movie is kinda fun, cutesy, and dangerous but not so dangerous that a happy ending isn't ensured.

A spectacular, stylish, thought-provoking and highly entertaining romantic thriller. I loved this movie. It`s smartly paced, character driven and vastly original that dose not go over the limit or try to be more than what it is. It the perfect blend of sci-fi mystery, thrills and romance. It has your attention from the start all the way to the finish and dose not stop to catch its breath. An instant classic. Director, George Nolfi crafts a superb and dazzling genre piece. A sensational masterwork. Matt Damon and Emily Blunt give such terrific performances, their chemistry is passionate, compelling and romantic. They are a screen couple that actually work.