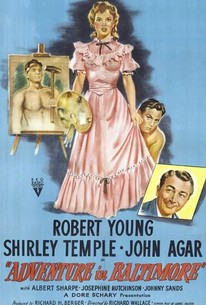 Set in the early 1900s, Adventure in Baltimore is a romantic comedy about the woman's suffrage movement. Shirley Temple plays a student at an exclusive girl's school who "sees the light" and begins campaigning for women's rights. This doesn't sit well with her minister father (Robert Young) nor with Temple's boyfriend (John Agar, then married to Temple). Eventually, Temple's dad is won over to his daughter's point of view, and delivers an impassioned sermon on tolerance and individual rights for the edification of the hidebound townspeople. Like most of Shirley Temple's "grown up" films, Adventure in Baltimore was a disappointment at the box office. ~ Hal Erickson, Rovi

Critic Reviews for Adventure in Baltimore

There isn't anything very convincing about this film. Just another Hollywood picture to give a name star an excuse to collect a paycheck.

Although there's a maximum of talk and a minimum of drama, flashes of humor and warmth come through.

[Shirley Temple, Robert Young, and John Agar] are the attractive principals; but their efforts are hampered by a script that never gets much beyond superficial sentiment and contrived comic situations.

There are no featured reviews for Adventure in Baltimore at this time.