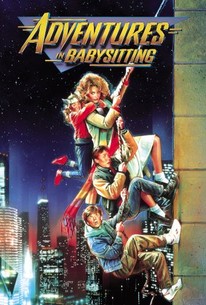 Critics Consensus: Sweet and spry, Adventures in Babysitting gets by on its amiable tone.

Critics Consensus: Sweet and spry, Adventures in Babysitting gets by on its amiable tone.

Critic Consensus: Sweet and spry, Adventures in Babysitting gets by on its amiable tone.

After reluctantly accepting a baby-sitting job, a teenager gets a call from her best friend who is stranded in downtown Chicago. With her charges in tow, she heads downtown to rescue her friend, setting herself and the children up for many comic mishaps, perils and hairbreadth escapes.

John Hemphill
as Drunk at Party

Kirsten Kieferle
as Sesame
View All

Critic Reviews for Adventures in Babysitting

In many ways, Babysitting is interesting for what it is not: namely, a John Hughes selfish-teen movie that asks, "Will the girl from the wrong side of the tracks get invited to the prom by the preppie?"

Although far from original. "Adventures in Babysitting" is a likable exercise In soft-core juvenile anarchy.

"Adventures" Is undeniably cute without being too cutesy and very likable despite its unoriginal and somewhat frenetic nature.

The true villain of the piece is novice writer David Simkins, whose doltish plot and dimensionless characters suggest a failed imitation of youth-movie maestro John Hughes.

Idiotic plot aside, there are surprisingly funny moments.

It doesn't quite work, Shue's attractiveness notwithstanding.

It doesn't add anything to the genre and produces certain boredom. [Full Review in Spanish]

There is no winning with this movie.

The direction is fast-paced, the characters are vulnerable and sympathetic and even the bad guys have their moments.

One very unique and entertaining comedy that has yet to be duplicated.

Audience Reviews for Adventures in Babysitting

A rather silly yet mildly enjoyable comedy that belongs in the '80s with its cheesy, dated jokes and inane sense of humor (as when someone calls another a homo as a slur), and today it won't be seen as more than an ordinary pastime that can still offer a few laughs.

"Adventures in Babysitting" is honestly one of the cheesiest films that I have ever seen. As a seventeen year old is stood up by her boyfriend, she is subdued to babysit for a little girl. This quickly turns into having to babysit her brother and his friend. I do not have much to say about this movie. It is fun for the first half hour, that is when you know what you're in for and you wait to see something hilarious happen. Truthfully, I was very let down, seeing as the film kept it's slow pace throughout, and I felt no real tension when they were intending it. Overall, it's written for little kids even though there is far too much adult references for kids to see, the director seems like he had a lot of fun making it, which is not necessarily a good thing, the one-liners are almost dreadful, and the situations made me role my eyes so much that I got bored. Also, it is about 20 minutes too long and could have had a much wittier writer. But it's harmless and I guess I liked it a little bit.

Funny movie about a girl whose boyfriend cancels their date. She agrees to babysit some kids but has to leave the house to rescue her friend who has run away. They get into all sorts of trouble,