The Adventures of Ford Fairlane1990

The Adventures of Ford Fairlane (1990) 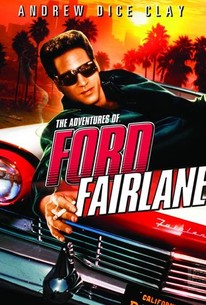 The Adventures of Ford Fairlane Photos

Controversial and often offensive stand-up comedian Andrew Dice Clay made his debut as a feature film star in this crude comedy. Fairlane is a "rock and roll detective" who works in the music business, has an office on Sunset Boulevard, and drives a 1957 Ford, with clothing to match. He floats through the rock clubs of Hollywood, picking up women and clients, and soon stumbles into a case involving the death of a heavy metal singer, a corrupt music executive (Wayne Newton), the murder of a radio shock-jock (Gilbert Gottfried), and the kidnapping of the jock's daughter (Maddie Corman). Music stars like Sheila E. and Motley Crue singer Vince Neil also have cameos in the film, which attempts to transplant Clay's aggressively obnoxious stage persona into a movie environment.

Brandon Call
as The Kid

Tone Loc
as Slam the Rapper

Sandra Sheeler
as Girl on Ladder

News & Interviews for The Adventures of Ford Fairlane

View All The Adventures of Ford Fairlane News

Critic Reviews for The Adventures of Ford Fairlane

Surprisingly funny and expectedly rude, this first starring vehicle by vilified standup comic Andrew Dice Clay has a decidedly lowbrow humor that is a sort of modern equivalent of that of the Three Stooges.

This expensively empty action comedy is as much fun as a car crash.

The person most likely to be entertained by ''The Adventures of Ford Fairlane'' need not be made aware of the film's existence. He's already on the screen.

The Adventures of Ford Fairlane is a movie about a hero I didn't like, chasing villains I didn't hate, in a plot I didn't understand. It is also loud, ugly and mean-spirited. That makes it the ideal vehicle for Andrew Dice Clay.

[A] slick glorification of hate and loathing that portrays women as sexually promiscuous and men as infantile, violent and feeble-minded.

...a misguided star vehicle that's aged horribly in the years since its 1990 release.

Isn't for every taste, but those tuned into Clay's goofy personality are rewarded with a hilarious performance that finds the comedian at his most confidant and playfully mischievous.

It's harmless fun with a breezy '80s ambiance -- a neon playground with a cross-eyed soundtrack, smoky widescreen cinematography, and a cool snapshot of Dice when he was king of the world.

It's bad, it's been forgotten, and we can all move on with nary a second thought.

As vulgar and obnoxious as its star. One of the very worst films of 1990.

Audience Reviews for The Adventures of Ford Fairlane

Andrew Dice Clay basically plays himself in this comedy, a perfect representation of the glory days of MTV and the sunset strip in 1990. I was a fan of MTV and the haircut bands of that era, so Ford Fairlane is a guilty pleasure, to be sure. Its cheesy and offensive yet hilarious also. Check out "Aint Got You" by Ford (Clay); it is an awesome contrast between what used to be rock and roll and what is passing for it both in 1990 and now. I love the all-star cast: Robert Englund, Priscilla Presley, Wayne Newton, Ed O'Neil, Gilbert Gottfried, and Lauren Holly. Holly excels in a small role as the vulnerable secretary with the knock-out figure. The Dice-man is exactly what you'd expect, for better or worse, and Maddie Corman is delightful as Zuzu, an MTV dance party-type. Has there ever been a greater groupie name than "Zuzu Petals?" The plot is disposable; who cares about the mysterious CDs? Accept The Adventures of Ford Fairlane for what it is, and just laugh along. As Dice would exclaim, "Unfu*#ingbelieveable!"

Say what you will about Andrew "Dice" Clay, but I LOVE this movie. Clay was a one-note comic, but he milked his 15 minutes for all it was worth, never more on display than in this movie. As a "rock and roll detective", the movie is filled with then-famous music industry people which give the movie an extra quality. What surprises is there is an actual story here. A genuine mystery that provides Clay with something to do besides lift material from his stand up act. It helps that they hired an actual filmmaker, Renny Harlin, to helm Clay's leading man debut. Harlin is a visually gifted director that knows how to orchestrate an action scene, fill the screen with eye candy, and keep things moving at a lively pace. Music group Yello adds an original musical score that adds to the overall good feel of the movie. Watch for a great cameo by Married With Children's Ed O'Neil as a police detective with a personal gripe against Clay. Let's just say that disco will never be the same. A guilty pleasure, and one damn funny movie.

Indefensible trash. I love it!

Andrew Dice Clay's so hilarious in this title role.

The Adventures of Ford Fairlane Quotes