The Adventures of Priscilla, Queen of the Desert (1994) 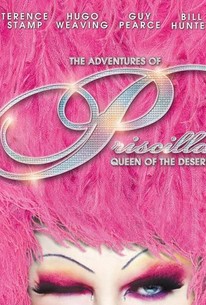 Critics Consensus: While its premise is ripe for comedy -- and it certainly delivers its fair share of laughs -- Priscilla is also a surprisingly tender and thoughtful road movie with some outstanding performances.

Critics Consensus: While its premise is ripe for comedy -- and it certainly delivers its fair share of laughs -- Priscilla is also a surprisingly tender and thoughtful road movie with some outstanding performances.

Critic Consensus: While its premise is ripe for comedy -- and it certainly delivers its fair share of laughs -- Priscilla is also a surprisingly tender and thoughtful road movie with some outstanding performances.

The Adventures of Priscilla, Queen of the Desert Videos

The Adventures of Priscilla, Queen of the Desert Photos

The usually menacing British actor Terence Stamp does a complete turnaround as Bernadette, an aging transsexual who tours the backwaters of Australia with her stage partners, Mitzi (Hugo Weaving) and Adam/Felicia (Guy Pearce). Their act, well-known in Sydney, involves wearing lots of makeup and gowns and lip-synching to records, but Bernadette is getting a bit tired of it all and is also haunted by the bizarre death of an old loved one. Nevertheless, when Mitzi and Felicia get an offer to perform in the remote town of Alice Springs at a casino, Bernadette decides to tag along. The threesome ventures into the outback with Priscilla, a lavender-colored school bus that doubles as dressing room and home on the road. Along the way, the act encounters any number of strange characters, as well as incidents of homophobia, while Bernadette becomes increasingly concerned about the path her life has taken. ~ Don Kaye, Rovi

News & Interviews for The Adventures of Priscilla, Queen of the Desert

View All The Adventures of Priscilla, Queen of the Desert News

Critic Reviews for The Adventures of Priscilla, Queen of the Desert

It's a tremendous film that was ahead of its time on LGBT issues and, in some ways, is ahead of ours.

On the whole, though, it is funny and compassionate, silly and sweet.

To its credit, whenever things get too treacly, Priscilla knows enough to break out those frocks and get the show in gear. That is entertainment for sure.

Not everything works equally well in this road movie, but writer-director Stephan Elliott keeps things watchable.

I wasn't prepared for the generosity and gorgeousness with which Aussie writer-director Stephan Elliott turn this most unlikely road picture into something arresting -- if a tad sentimental -- in its naive vision of a perfectly tolerant world.

The plot of Priscilla isn't as important as the outlandish, wicked dialogue , the wild costumes and makeup, and the general high spirits of the entire enterprise.

For the 90 minutes when it isn't stumbling, it's flying high on glitter and glam.

The true heart of the movie, though, is Terence Stamp. He may be a little stiff in the show routines but, offstage, he's a revelation, giving a performance of near-perfect restraint and dignity.

Outrageous and giddy, the main characters in this movie make The Adventures of Priscilla, Queen of the Desert a summer entertainment that won't soon be forgotten.

Tremendous fun, with a deliciously sugar-coated message, this is the closest the cinema has come to a proper musical in years.

Where else are you going to see General Zod, Agent Smith and the guy from Memento as drag queens stranded in the Australian Outback?

Audience Reviews for The Adventures of Priscilla, Queen of the Desert

A modern classic road movie that finds a special balance between flamboyant comedy and poignant drama, and what makes it such an endless pleasure to watch is its refreshing combo of hilarious dialogue, excellent performances from the main trio and, of course, the music.

A bit Lord o' the Ringsy around the middle with all the traveling, but on the whole, a warm story about a lavender bus full o' drag queens and their journey of self-discovery and revival. Terence Stamp possesses amazing gravitas, Guy Pearce is louder than I've ever seen him but I can't really decide whether his performance is caricature or not, and Hugo Weaving's blue-lidded peepers are quite expressive.

Yes I'm thinking the exact same thing as you, how in dingo doo doo did they get Terence Stamp to do this?!. Two drag queens and a transsexual embark on a road trip across the Aussie outback to Alice Springs in order to put on a show. Little do they know that the hotel they are headed for is managed by a woman still married to one of the trio. Well the drag queen still married to the woman knows, he just hasn't told his friends yet. The road trip idea isn't an original one that's for sure but turn it into a naughty drag act in the deserts of Australia and now you've got something. Sure enough the whole notion of doing something like this in the one country where homophobia and racism is not unusual and where men are men no question, is a brave move. This film relies heavily on stereotypes, almost every character is a sly, but some might say perceptive, stereotype on the real world. The three main characters played by Weaving, Pearce and Stamp are very likeable, mouthy, bitchy queens that put each other down like no ones business, yet they clearly do care about each other greatly. These three are played up for the camera naturally, made to look loud brash and extremely catty, nails at high noon, but its harmless fun. As for other characters or generalisations its obvious. All the men portrayed in the outback are checkered shirt, cowboy hat, jean wearing butch types that look a bit grubby. You have the typical manly gruff Aussie female called Sheila and a gold digging, trashy strip teasing Filipino woman. The only character you would expect to be bigoted is Bob Hunter's character who looks it but turns out not to be. There aren't really any surprises in the film, most characters are exactly as you would expect them. As its set in the outback you do get the obligatory ideas before its even started, can't be helped, we have 'Crocodile Dundee' to thank for that folks. Despite the screaming stereotypes and scene similarities to other Aussie films of the time the film is a great comedy. Just the thought of a po-faced Stamp in drag complete with a flowing blonde wig and earrings bitch slapping Guy Pearce and continuously coming out with sarky derogatory remarks is enough to peak my interest. At the same time the film is very touching and sweet. On one hand you have Stamp's character trying to get over the recent death of her partner whilst also hoping to find herself again, middle aged, tired with her job and needing a new spark in her life. On the other hand you have Weaving's character who is trying to balance his life between what he is on the inside, his friends and of course hoping/worrying if his son will accept him. Plus if his friends will accept him for having a semi straight secret life. This film along with another in the same year put Aussie film making on the map and has since created a huge cult following much like 'Rocky Horror'. Completely enjoyable ride no matter what your sexual orientation. A great soundtrack which doesn't go overkill with ABBA, superb performances from the main trio and with some truly gorgeous scenery/location work that I'm sure boosted tourism. Everybody wins with this one.

[img]http://images.rottentomatoes.com/images/user/icons/icon14.gif[/img] I cannot recall ever seeing a film that's even nearly as charming, or profound, as this hugely upbeat, hilariously camp, cult classic. Hugo Weaving, Terrence Stamp and Guy Pearce are drag queen transexuals, in a comedy movie, you simply cannot describe that premise in any way other than, absolutely genius. But in a lot of different ways, it's nothing like the film you would proably be expecting. The film's narrative development progresses as it unfolds at a quick pace and changes the image of the trio effortlessly from a pack of hilarious, hugely likable comic personalities, to some saddened, ageing, troubled, emotionally frustrated human beings, who eventually end up in all sorts of unfortunate situations that at times I found quite overwhelming among other things. Such as the idea that the three terrific leads unforgivably missing out on many major award nominations, let alone wins, for their fantastically charismatic performances, is simply unbelieveable. Unlike most modern comedies it never runs out of steam, and all the way through I watched it with a smile firmly on my face. If anyone out there watched this film and had trouble finding even the very best gags hysterical, then your someone who is obviously without even the slightest sense of humour. A road trip movie that truly lives up to the title doesn't come around often, it's a real adventure that quite naturally prevents you from resisting to smile. It's always fun annd thanks to it's relaxed yet comically capable cast, it's very well-skilled directorial talent, visually impecable landscapes, and it's bus named Priscilla, that makes for one unforgettable and uproaringly funny set piece, it's a film that remains in your thoughts and keeps you uplifted every time you think about it. It's simply the manifestation of film making energy, a humourous and heartfelt classic that is as colourful, beautiful and gratifying as the region it is set.

The Adventures of Priscilla, Queen of the Desert Quotes