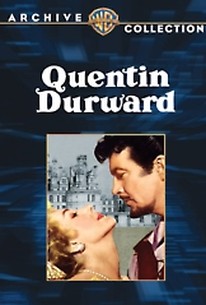 Sir Walter Scott's medieval take on the "John Alden" story formed the basis of Quentin Durward. Robert Taylor dons armor in the title role, playing the son of an aging Scottish nobleman. He has been dispatched to propose to a high-born Frenchwoman (Kay Kendall) on his uncle's behalf, but one look at the lady and Quentin Durward falls head over heels. But there are villains to vanquish in several sword fight setpieces, the best of which is the climactic battle in which the hero and the head bad guy (Duncan Lamont) dangle on bell ropes. Quentin Durward was the fifth MGM Robert Taylor picture filmed in whole or in part in England; the others were Conspirator, Quo Vadis, Ivanhoe and Knights of the Round Table.

Harcourt Williams
as Bishop of Liege

John Carson
as Duke of Orleans

Sir Walter Scott's novel about knightly valor in the fifteenth century has been translated into a widescreen swashbuckler which offers some literate and witty dialogue as well as the customary heroics.

Standard but enjoyable medieval tale of derring do. Kay's lovely although all she has to do is clutch her jewel box and fret.