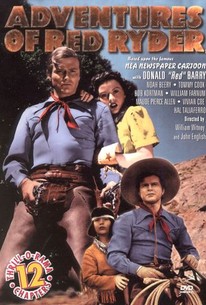 Fred Harmon's popular comic strip and radio hero Red Ryder came to the screen in this above-average Republic serial directed by the team of William Witney and John English. Don Barry, until this film mainly playing villains, was cast in the title-role, a rancher organizing the local land owners in opposition to crooked banker Calvin Drake (Harry Woods) and his chief henchman Ace Hanlon (Noah Beery, Sr.). Having learned that the Santa Fe Railroad is planning to build a line through the town of Mesquite, Drake and Hanlon are attempting to buy all the surrounding land by any means possible, including murder. When Colonel Ryder (William Farnum), Red's father, is murdered by Drake's hired killers, Red teams of with his young Native American pal Little Beaver (Tommy Cook) and lovely Beth Andrews (Vivian Coe aka Vivian Austin), the daughter of another murder victim, Sheriff Andrews (Lloyd Ingraham). With the new sheriff (Carleton Young) in the employ of Drake and Hanlon, it takes the combined efforts of Red, Little Beaver, Cherokee (Hal Taliaferro, formerly Wally Wales) and "The Duchess" (Maude Pierce Allen), Red's indomitable aunt, to bring the villains to justice in the 12th and final chapter, "Frontier Justice." According to co-director Witney, a staged fire went out of control during the filming of this serial, almost burning the soundstage to the ground. Although highly praised by reviewers and audiences alike, Don Barry, whom some observers compared favorably to James Cagney, hated the role and balked at playing it again. Consequently, when Republic inaugurated a regular series in 1944, William Elliot played Ryder. But so popular was Barry's original rendition of the role that he would henceforth be known as Don "Red" Barry.

Harry Worth
as Calvin Drake

There are no featured reviews for Adventures of Red Ryder at this time.