The Adventures of Rocky & Bullwinkle2000 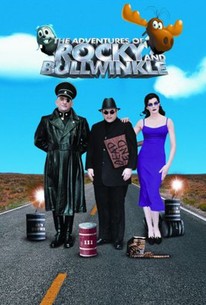 Critics Consensus: Though the film stays true to the nature of the original cartoon, the script is disappointing and not funny.

Critics Consensus: Though the film stays true to the nature of the original cartoon, the script is disappointing and not funny.

Critic Consensus: Though the film stays true to the nature of the original cartoon, the script is disappointing and not funny.

The Adventures of Rocky & Bullwinkle Photos

The pride of Frostbite Falls and Whatsamatta U's most famous alumni find their way onto the big screen (and the real world) in this comedy inspired by the popular cartoon series. Years after their TV show is cancelled, Rocky the Flying Squirrel (voice of June Foray) and Bullwinkle J. Moose (voice of Keith Scott) are barely getting by on residual checks; they're wondering what to do next when Fearless Leader (Robert De Niro), the evil genius of Pottsylvania, transforms himself from a cartoon into a living, breathing, nasty human being, thanks to the assistance of television executive Minnie Mogul (Janeane Garofalo). With the help of his newly flesh-and-blood henchmen Boris Badenov (Jason Alexander) and Natasha Fatale (Rene Russo), Fearless Leader plots to take over the world by using television to zombify people and then persuading the masses to elect him president. Can the daring flying squirrel and the well-meaning but not especially bright moose stop them? Unlike the TV show, which made a virtue of its unsophisticated animation, The Adventures of Rocky and Bullwinkle employs a technically sophisticated blend of computer-generated animated characters (Rocky and Bullwinkle) and live actors (Fearless Leader, Boris, and Natasha). Human beings making guest appearances include Randy Quaid, John Goodman, and Jonathan Winters.

Norman Lloyd
as Wassamotta U. President

Critic Reviews for The Adventures of Rocky & Bullwinkle

While the movie continually teeters on the brink of abject corniness, it never quite topples off. And it doesn't hurt to have Robert De Niro, Rene Russo and Jason Alexander camping it up as cartoon villains come to life.

Kids will enjoy it, even if the jokes escape them.

It's sledgehammer whimsy, and it's not talking to me.

The picture, though loose and lazy for much of its life, does at least have a high degree of innocence, charm and pep.

Too fragmented to either please or sufficiently entertain any of its target audiences.

The Adventures of Rocky and Bullwinkle is completely in the spirit of its progenitor.

...the picture eventually segues into a frenetic and mostly kid-oriented midsection that slowly-but-surely drains one's interest...

In their natural pen and paint environment, Rocky and Bullwinkle shine. But they seem as dull as dishwater, and completely out of place, in a live action world. Hence, their Adventures never connect with viewers.

Rocky and Bullwinkle's CGI effects recall its antecedent Who Framed Roger Rabbit, and like that film its dialogue is packed with cultural references that will have adults laughing harder than the kids.

All things considered, I got more fun out of the much maligned earlier attempt of bringing characters from the show to film, Boris and Natasha.

Expected punny dialogue and sight gags ensue, but also packed in are pointed, self-deprecating barbs about Hollywood, moviemaking, and the conventions of cartoons themselves.

These complaints are mere trifles compared to the fun I had at seeing my favorite moose and squirrel again.

Audience Reviews for The Adventures of Rocky & Bullwinkle

A train wreck that is almost fun to watch because it is so incredibly bad. The entire cast and crew must have lost their minds to hallucinogens during the filming. I have no idea why anyone would try to adapt such a campy and cartoony show. It would be like trying to do a live action version of Gumby.

The Adventures of Rocky & Bullwinkle Quotes