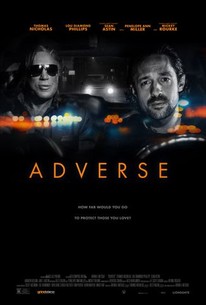 Thomas Nicholas ("Red Band Society") and Mickey Rourke (The Wrestler) star in this gritty, intense urban thriller about one man's quest for revenge. Struggling to make ends meet, rideshare driver Ethan (Nicholas) learns his sister Mia is deep in debt to a sleazy drug dealer. When Mia goes missing, Ethan discovers that crime boss Kaden (Rourke) is behind the act, and to get close to him Ethan takes a job as Kaden's driver. One by one Ethan hunts down members of Kaden's crew to wreak bloody vengeance as he prepares to confront Kaden himself. The stellar cast also includes Lou Diamond Phillips, Sean Astin, and Penelope Ann Miller.

It's not the plot that resonates once the credits roll - it's the characters.

This lo-fi crime thriller from indie filmmaker Brian A. Metcalf is a slow burn character piece, that benefits from stripped back visual aesthetics.

The sort of melodramatic crime film that can be appreciated for hitting the usual genre beats, but proves to have more to offer for those willing to dig in.

Brian A. Metcalf has crafted a solid neo-noir with Adverse. The writer-director-producer offers a glimpse into the underbelly of Los Angeles as this dark thriller prowls the after hours streets of the City of Angels.

Adverse feels like it never really goes anywhere, and doesn't accomplish anything. It just isn't entertaining, and is a struggle to get through for multiple reasons.

[A] rage-filled, mindless vendetta movie that's so bad, it verges on parody ... And just like the body count that generically piles up in the movie, Adverse will be relegated to the disposable pile of deadweight movies with no soul and nothing to say.

Adverse rises above the typical crop and delivers an intimate look at society's underbelly, a place filled with murderers and scoundrels who quietly lament the broken path they chose.

It amounts to an entertaining, absolutely engaging neo-noir revenge thriller. Especially with Nicholas committing to his flawed protagonist every single step of the way.

Seeing all the familiar faces in the cast is about the only entertaining part of this truly terrible, nonsensical crime drama.

Even when juggling stimulating topics of grief and responsibility, Metcalf's throwback thriller is enjoyably operatic and absurd.

Thomas Nicholas shows the potential to be an action star in his new starring role as a rideshare driver in the new thriller, Adverse.

Danielle Solzman
Solzy at the Movies
View All Critic Reviews (12)

There are no featured reviews for Adverse at this time.