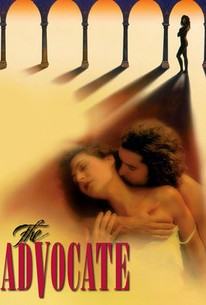 The Advocate (The Hour of the Pig) Photos

In France in 1452, the dark superstition of the Medieval era was beginning to give way to the more enlightened attitudes of the Renaissance. But the changes were slow in coming, as Richard Courtois (Colin Firth) learns when he moves to the country village of Abbeville, owned and ruled by the Seigneur (Nicol Williamson). Courtois is a lawyer, or an "advocate" as they were called in those days, and the Seigneur has hired him to act as a public defender for those who cannot provide their own legal counsel. One odd remnant of the dark ages that Abbeville has not purged from its legal system is the practice of prosecuting animals as well as humans for crimes; as Courtois arrives, he nearly witnesses the execution of both a man and a donkey who were found guilty of bestiality (the donkey was spared at the last minute because it could not be proved that she consented to the act). So Courtois is not exactly surprised when one of his first cases finds him defending a pig against charges of murdering a small child. Courtois soon discovers that the pig belongs to Samira (Amina Annabi), a beautiful gypsy woman he finds himself falling in love with. Losing the pig would mean losing many meals down the road, so to win Samira's good tidings, Courtois must prove the pig innocent -- which means finding the real killer. However, since the Seigneur is eager to see Courtois (or anyone, for that matter) marry his daughter Filette (Lysette Anthony), his affection for Samira may not be good for his future employment prospects. This period comedy/drama also features Donald Pleasance, Ian Holm, and Michael Gough. ~ Mark Deming, Rovi

Nicol Williamson
as The Seigneur

Critic Reviews for The Advocate (The Hour of the Pig)

A quirky British film that seems to aim halfway between Monty Python and Sommersby.

A unique subject, though it's presented a little unevenly. Firth is a real charmer.

Audience Reviews for The Advocate (The Hour of the Pig)

There are no featured audience reviews yet. Click the link below to see what others say about The Advocate (The Hour of the Pig)!

The Advocate (The Hour of the Pig) Quotes