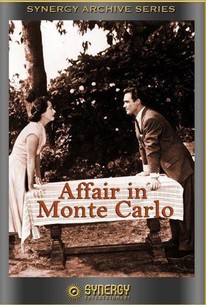 Originally titled 24 Hours in a Woman's Life, the British Affair in Monte Carlo stars Merle Oberon and Richard Todd. A compulsive gambler, Todd is on the verge of disgrace and ruin. Ms. Oberon makes it her mission in life to save Todd from himself. The story is told from the point of view of worldly writer Leo Genn, who is obviously intended as the alter ego of Stefan Zweig, author of the original novel 24 Hours in a Woman's Life. Whenever the drama bogs down, the viewer is encouraged to revel in the authentic Riviera locations. ~ Hal Erickson, Rovi

Richard Todd
as The Young Man

Jacques B. Brunius
as Francois

[Affair in Monte Carlo] is a film of such artificiality and bathos the very typewriter keys cling together to avoid describing it.

There are no featured reviews for Affair in Monte Carlo at this time.