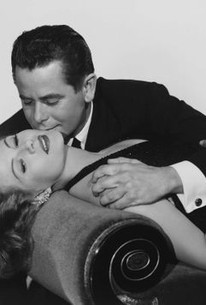 In this romantic spy thriller, a nightclub performer plys her trade in her husband's Trinidad bar. He is murdered by a notorious spy. Soon afterward, the police ask the widow to try to get close to the killer and gather information. Her work is nearly thwarted when her bumbling brother-in-law appears, looking to bring the killer to justice himself. This film marked the return of bombshell Rita Hayworth who had retired from movies during her marriage to Prince Aly Khan.

John Sherman
as Englishman
View All

Critic Reviews for Affair in Trinidad

Affair in Trinidad is neither as bad as advance reports indicated nor as good as Rita Hayworth fans would hope for.

A senseless romantic espionage fails to recreate the chemistry that Rita Hayworth and Glenn Ford had in the noir Gilda, but Hayworth looks glamorous in Jean Louis Oscar-nominated wardrobe.

This tired tropical thriller is another attempt at making a Gilda.

Audience Reviews for Affair in Trinidad

Rita looks great and Glenn is his usual pugnacious self but this attempt to strike gold again with the "Gilda" stars is rather routine.

Another one of those movies on the list from the Ross Elliott List on IMBD Data Base. Even though he only played Corpse of Neal Emery, thel late husband of Rita Hayworth, in this movie, I guess his part lasted all of 12 sceonds if that. But it introduced me to the acting of not only the Beautiful ms Hayworth but it showed me a side of Glenn Ford I never saw before, I just wasn't used to seeing Gleen duke it out with someone. Its a great movie, Rita Hayworth's husband while living in Tridad is found dead, the first report is suicided but we all know that doesn't make a movie, only murder does, So in the movie we track who the killer was, and yes even this many years after WWII we are still trying to connect the German's with the plot of overthrowing the USA, gee what ever happen to than and how much money was wasted, kind of like the Terriost threat of today. anyway its a great movie, Rita shows her talent and beauty. Buy it, rent it, borrow it but most of all see it. 5 Stars

Pretty typical WW2 Espionage flick, but Rita and Glenn's chemistry here doesn't even approach what they had in Gilda. Fans of Hayworth will enjoy the dance sequences. Also contains the gem of a line "Didn't you used to write articles about the V2 rocket before the war?"