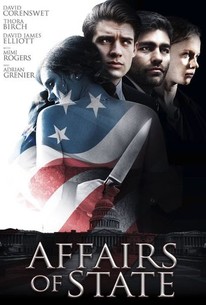 In his quest for power, D.C. aide Michael Lawson will do anything to take part in Senator Baines's White House campaign, including blackmailing Baines's shady advisor (Adrian Grenier, TV's "Entourage") and sleeping with the candidate's wife (Mimi Rogers). But when he gets involved with the senator's alluring daughter, Lawson learns his dangerous game could have a deadly payoff. Also starring Thora Birch (Patriot Games), this pulse-pounding thriller is a perfect match for today's turbulent political climate.

Critic Reviews for Affairs of State

Director Eric Bross's Affairs of State is a political thriller that plays like an adaptation of a trashy romance novel.

In an era when so many indies are either genre exercises or quirky dramedies, a well-acted, ripped-from-the-headlines melodrama is a novelty.

If the movie were self-aware enough to understand its true nature as glorious direct-to-video junk, it would look a whole lot less pretty, but its lurid cheap thrills would be more thrilling and lurid.

Audience Reviews for Affairs of State

There are no featured audience reviews yet. Click the link below to see what others say about Affairs of State!