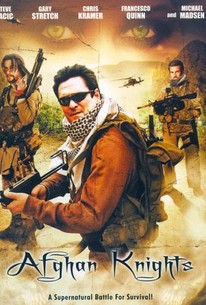 U.S. military experts engage in a paranormal battle for survival while attempting to rescue a fellow soldier who was left behind in Afghanistan. When Pepper (Steve Bacic) left a man behind in Afghanistan, he didn't realize that decision would linger with him for the rest of his days. Now, Pepper has a chance to make good on that decision by venturing behind enemy lines to save his captured comrade. In order to esure that their mission is a success, Pepper organizes a rescue squad comprised of the best soldiers in the military. But even the most seasoned combat soldiers are no mach for the evil that awaits them in the formidable Afghan mountains. Michael Madsen, Gary Stretch, and Chris Kramer co-star.

Maryam Ghaeni
as Soroya
View All

There are no critic reviews yet for Afghan Knights. Keep checking Rotten Tomatoes for updates!

There are no featured audience reviews yet. Click the link below to see what others say about Afghan Knights!