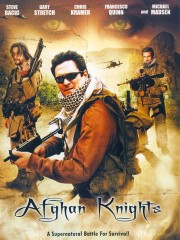 Gaspar O
December 14, 2009
I picked this up at a Blockbuster that was going out of business, mainly because Michael Madsen was in it and I wanted to watch him kick some Mongol ghost ass. Sadly, his part is small and the most exciting thing he did was spit beer. This is not a great movie but it's not the worst movie I've seen either. I enjoyed the brief moments of gore and liver eating.

Afghan Knights maintains a decent energy throughout in telling its story about the creepy modern day manifestations of Ghengis Khan.

This story is ultimately won or lost on whether or no you actually believe in the power of Genghis Khan to return to haunt the living and play hideous tricks of the brain on them. If this is beyond your reach, then you might be advised to spend your time going through your old baking sale receipts instead. Otherwise, this film features the Khan and a few of his cronies terrorizing the hell out of a group of big dog soldiers who return to Afghanistan to rescue a man who is in dire straights. One of the soldiers, named Pepper (Bacic) wants to rescue Jonathan, (Kramer) a man he left behind a year ago. So you basically have a double mission which works out as they rescue the first man, Amad (Quinn) and stumble into a cave where the other man is hiding out. This is the magic cave where ghosts appear and the film employs a rather effective score to create the sensation that this is a creepy place where a lot of strange schitt goes down. It is considered a sacred cave and has been for thousands of years as numerous tribes have fought over it and tried to claim it as their own. Only now, our unwitting soldiers find themselves essentially trapped in it and are forced to come to terms with their own fear.

Several of the members are killed by what appear to be ghosts or disembodied spirits. Regardless of what does it, the ranks rather quickly deplete and much chaos ensues. Jonathan starts tripping out by telling Amad?s wife Soroya (Maryam Ghaeni) that he is going to kill her and Frank (Murdocco). She is terrified but cannot tell Frank because they don?t speak the same language. In these scenes Jonathan is decidedly languid and appears to be on the verge of falling asleep. If this is an acting technique then its brilliant because it slows the scene down to the point that it becomes almost hallucinatory. If not, then its just laziness on his part and thereby beyond the pale.

For a machismo exercise there aren?t many displays of raw bravado in this film. There aren?t really any action sequences save one fight between our guys and the Pakistani-Afghani border patrol. The rest is merely wait and see as Genghis Khan swirls about deciding which ones he wants to turn into a leather coat for his horse. The thing about this film is one never quite feels the presence of Genghis Khan despite his occasional appearance. The terror associated with him is nowhere to be found and the result is a fairly ludicrous film that doesn?t come through when it needs to the most. The scenes where Genghis Khan is present rush by so all you get is a fleeting image of him and his horse. He certainly looks like Genghis Khan ought to look (we will never know for certain) and possesses the screen for those few seconds, but there is no eating of heads, no dashing brains to bits, no poetic ruminations with the sword against the tepid flesh of the infidel. No, the creators want to tease you and perhaps this isn?t too terrible a strategy. There is something to be said about showing less. Still, this is a major plot point and we hardly ever get a chance to see it unfold. It feels like a ripoff.


There isn?t a lot to be said regarding the plot of this film. Everybody ends up in a cave and a few die and wacky spirits appear and then we are shown what is really going down. There?s a twist that comes through in the end that is supposed to explain everything but only manages to confuse the issue. To me the final sequence doesn?t make a whole lot of sense in the context of the film. Perhaps I?m just daft and its perfectly reasonable (again, according to the logic of the film) but I couldn?t see it. Moreover, I gradually lost interest in the characters so by the time of the final scenes I?d checked out and was dreaming of the fat man splashing in his kiddie pool. Some of the female spirits are sexy in that middle east covered from head to toe kind of way. The eyes take on a mysterious power far more beguiling than what we see in the West. Anyway, there were a couple of those flying about shrieking passages out of the Koran (OK, probably not, but in my version?remember I was nodding off at this point?it seems to make sense). In my mind, the floating women were the most intriguing aspect of the whole story. I could care less which men were led to the slaughter and which one?s survived. Give me female apparitions any day of the week and I?ll be set.

So, aside from the sexy ghosts the aesthetics of this film lack a certain focus. There is nothing glorious or thrilling here. It plays out in a pedestrian fashion with the interior of the cave serving as some glorified tomb. It feels like death is upon you in a weird way as the walls do not move and you are forced to reside along with these characters in a relatively confined space. There is no way out and it certainly seems as if this is the case. So, in this regard at least, the film succeeds flawlessly in capturing the essence of what it would feel like to be trapped in a cave with those sinister spirits mulling about.

The performances in this film are adequate for what it is. Nothing stands out. The hardest working man in show business, Michael Madsen, growls quietly, groans a bit, a plays the same heavy he?s been playing for years. There is nothing original about his performance. Indeed he seems to be phoning it in at times but he still conveys a viable threat that hangs over the entire film. Steven Bacic conveys a certain manner of confusion and terror in his character. Pepper is the type of soldier who never quite comes home and Bacic manages to capture the essence of this phenomenon. Chris Kramer does the creepy eye thing with expert precision as he slowly burns away into a stellar madness. Kramer is quite good at being menacing, difficult and strained. Gary Stretch as Nash definitely has screen presence that is molded by his ability to appear nonchalant on screen while still maintaining a certain intensity.

Overall, this film is moderately successful in selling the idea that Genghis Khan?s spirit has found its way into a cave 700 years after his reign. One never quite feels Genghis Khan in the film and it just seems to be merely a story about a bunch of military guys trapped in a cave with absolutely nothing intelligent to say to one another. These are some of the most inarticulate men to gather in one place aside from American football games and election halls. Ultimately, this is a film that is worth watching if you don?t mind waiting for a fright that never materializes. I don?t know the point of this film but if it was to make its audience feel that they were going to be attacked by Genghis Khan?s hordes, it sort of failed. However, it is wanted only to create an atmosphere of such phenomena it succeeded to a point. There are moments where it reaches a certain level of genius but these are few and far between.

Jennifer J
½ June 7, 2008
Bacic is seriously hot ... which is about the only thing that made it watchable. The story was confusing ... but the plot resolution and some of the fight scenes were good. Wished they'd put more into the whole movie, though.

Ryan S
½ April 7, 2008
Not too bad, I felt it was too slow at first, and than once things started happening, it started to become rushed. It had a unique, and interesting plot though, and some decent action. All in all An alright movie, nothing special though.

Carrie S
January 10, 2008
Should've known better but took a chance. Gave it a whole star vs. 1/2 for its unintended comic appeal.

James H
July 29, 2007
I could not get into this movie at all. I did not find it very interesting, it was disorganized and it jumped around a lot. Just was not for me. The acting wasn't bad, interesting score.
Page 1 of 1