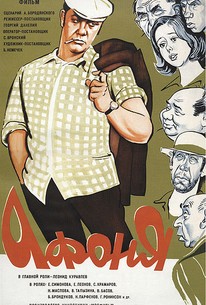 In the former Soviet Union, all apartment blocks were owned by the State. Because they were poorly built and poorly maintained, service and repair people held tremendous power, and used it. One plumber might serve a whole street of apartment buildings, and could demand whatever he wanted in order to perform even the most routine repairs, ie...extra money or a bottle of vodka (or more). In this comedy, the reality of this situation is clearly depicted. Afonya (Leonid Kuraviev) is a typical drunken, bullying plumber, extorting extra money and drink from his victims. He pals around with his buddy Kolya (Yevgeny Leonov), spending most of his "working" day in bars, drinking beer and eating crawfish and salted fish. Despite constant reprimands from the workers' committee, nothing puts a dent in his behavior until he falls in love with lovely young nurse Katya (Yevgenia Simonova), who insists that he treat people better. His buddy Kolya wants him to continue doing things the old way. West Europeans viewing this film found it surrealistic, because they could not believe the situations in it were real. Soviets, on the other hand, found it side-splittingly right on target, and it was very popular. ~ Clarke Fountain, Rovi

There are no critic reviews yet for Afonya (Афоня). Keep checking Rotten Tomatoes for updates!

There are no featured reviews for Afonya (Афоня) at this time.