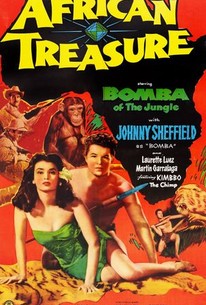 Number Seven in Monogram's Bomba the Jungle Boy series was African Treasure. This time Bomba (Johnny Sheffield) agrees to help geologist Arthur Space and his team locate a hidden diamond mine. Unfortunately for our hero, Space and his cohorts Lane Bradford and Lyle Talbot are actually jewel thieves. For a while, it looks like the villains have the upper hand, but a convenient landslide changes things. The heroine is played by voluptuous pin-up girl Laurette Luez, whose acting ability is hardly a consideration here. Stock footage from African Treasure later popped up in Monogram's Bowery Boys entry Jungle Gents, which also co-starred Laurette Luez. ~ Hal Erickson, Rovi

There are no critic reviews yet for African Treasure. Keep checking Rotten Tomatoes for updates!

There are no featured reviews for African Treasure at this time.