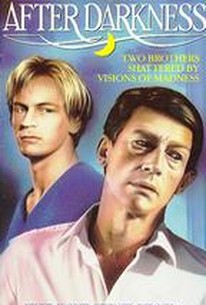 In this otherwise routine film, John Hurt is outstanding as the deceptively unbalanced Peter, brother of Laurence (Julian Sands), an inmate for the last many years in a mental institution in Geneva, Switzerland. An unusual accident cost the life of Laurence's twin brother, when they were just little boys, and sent Laurence to the Geneva clinic. For reasons of his own, Peter, a respected anthropology professor, gets Laurence released from the institution's care and then sets them both up in a low-end apartment in the city. When Pascale (Victoria Abril), a young college student, starts to fall for Laurence, Peter's own mental state is called into question. ~ Eleanor Mannikka, Rovi

Critic Reviews for After Darkness

There are no critic reviews yet for After Darkness. Keep checking Rotten Tomatoes for updates!

There are no featured reviews for After Darkness at this time.