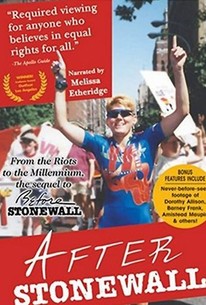 From a historical perspective on AIDS to the brutal slaying of Matthew Shepherd, After Stonewall exposes 30 years of struggle and hope since the 1969 uprising at Stonewall Bar in New York's Greenwich Village. A sequel to his 1986 Emmy Award-winning Before Stonewall, director John Scagliotti returns to the place where he left off, examining how the movement has expanded from activists on the fringe to a worldwide movement. Narrated by famed musician Melissa Etheridge, the film highlights the victories and defeats, challenges and uncertainties faced by the movement as the economic, political, and social tides fade and flow. Originally aired on PBS in 1999, After Stonewall features testimonies from numerous activists and gay rights supporters, including novelist Dorothy Allison, Congressman Barney Frank, ACT-UP founder Larry Kramer, and best-selling author Rita Mae Brown.

Critic Reviews for After Stonewall

a handsomely produced film that doesn't explore new territory or forge ahead with new insight, but is useful, nonetheless, as a primer on the history of the period

Audience Reviews for After Stonewall

Time dated at the conclusion of the nineties when gay activism was at its height, there has been a regression in the movement and now new momentum. Great for its time, the film makers may want to bring it up to date.