Efter repetitionen (After the Rehearsal) (1984) 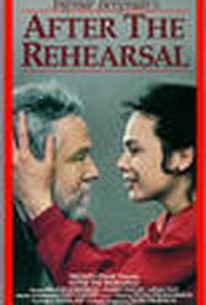 Ingmar Bergman's After the Rehearsal stars Erland Josephson as a theater director named Henrik Volger. He is in the midst of mounting a production of a Strindberg play when he is visited by Anna Egerman (Lena Olin), an actress whom he has cast in the play. Volger was involved with Anna's mother, Rakel (Ingrid Thulin), an alcoholic has-been actress who once was Volger's lover. Rakel intrudes upon their conversation, and the two women confront Henrik about how he has lived his life. This 72-minute production originally aired on Swedish television before receiving theatrical distribution. The cinematographer on the film is Bergman's longtime collaborator Sven Nykvist. ~ Perry Seibert, Rovi

Nadja Palmstjerna-Weiss
as Anna at age 12

Bertil Guve
as Henrik at age 12

Critic Reviews for Efter repetitionen (After the Rehearsal)

Rarely, in fact, has a film succeeded so well in projecting the kinds of interior states usually conceded to novels, but forfeited by films.

"After the Rehearsal" evolves into such a fascinating, convincing reflection of backstage psychology and emotional combat that it should prove irresistible to anyone susceptible to the lore of the theater.

What we are left with at the end of After the Rehearsal, however, is the very strong sense of an artist who has sacrificed many lives for the sake of his art, and now wonders if perhaps one of those lives was his own.

After the Rehearsal may well be another Bergman classic.

There is something liberating in the very schematism of the project: he no longer needs to pretend that his mouthpieces are real people.

The director's mea culpa for choosing his art over his family life.

Although After the Rehearsal is blessed with three superb performances (especially Thulin, as a has-been actress who attacks the director for having abandoned her), it is trapped in its staginess.

Ingmar Bergman's own little Tempest in a teapot... Hardly light material, but it's pretty frisky stuff for Bergman.

A stark and haunting conclusion to Bergman's main period that combines an intelligent approach to weighty issues with the director's visual flair.

Audience Reviews for Efter repetitionen (After the Rehearsal)

With "After the Rehearsal," Ingmar Bergman limits his tools to one minimal set and just three speaking parts. Erland Josephson stars as Bergman alter-ego Henrik, a veteran "difficult" director who's not shy about bullying actors to get what he wants. He's sitting onstage in an empty theater, lost in contemplation, when actress Anna (Lena Olin) enters. The two have an ambivalent relationship mixing attraction and resentment, and soon are drawn into a long discussion about their own bond as well as the general dynamic between a director and his cast. This obviously serves as a platform for Bergman venting many of his personal ideas and frustrations. But Henrik is also the ex-lover of Anna's late mother Rakel (Ingrid Thulin), a volatile actress who drank too much and erratically veered between arrogance and insecurity. As her foibles are debated, the film's middle detours into an extended flashback conversation between she and Henrik. To add a surreal touch, the set never changes and Anna reverts to a silent, pubescent girl. For the third section, Henrik and Anna wrap up their dialogue, climaxing in an electric exchange where they spontaneously imagine future events as if brainstorming a fresh play. "After the Rehearsal"'s stiff construction is bound to alienate many viewers but, with a 70-minute running time, it's not a rigorous test of one's patience. And Josephson and Thulin are magnificent, of course, just as they were in so many earlier Bergman projects.

Excelling tribute to memories and...fading desire.A great t.v. movie and the first one after Bergman's official retirement with Fanny och Alexander.The name Vogler is not a surprise to Bergman fans,moreover the story itself looks as if it's a race for the elderly theater director's life,closing accounts before his imminent (?) death.

Efter repetitionen (After the Rehearsal) Quotes