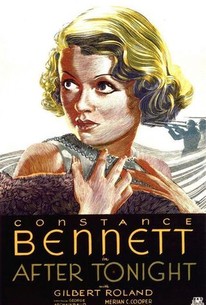 Released in Great Britain as Sealed Lips, this WWI melodrama stars Constance Bennett as Carla, aka Russian spy "K-14." Though there's no room for romance in her line of work, Carla falls in love all the same with Austrian captain Rudi (Gilbert Roland). When he discovers that she's working for the enemy, Rudi is forced to arrest Carla, a turn of events which she takes in stride as the fortunes of war. Though slated for a firing squad, Carla manages to escape and after the war is reunited with Rudi at the train station where they first met. One of the screenwriters was Worthington Miner, later a leading light of the TV anthology series Studio One. Coming at the tail end of the early-1930s "spy cycle," After Tonight lost $100,000 at the box office, forcing RKO Radio to rethink the studio's contract with Constance Bennett. ~ Hal Erickson, Rovi

Selmer Jackson
as A Spy

Selmar Jackson
as A Spy

George Davis
as Frenchman
View All

Critic Reviews for After Tonight

There are no critic reviews yet for After Tonight. Keep checking Rotten Tomatoes for updates!

There are no featured reviews for After Tonight at this time.