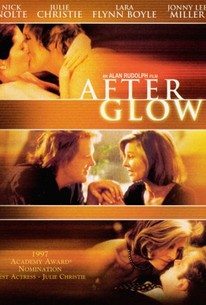 When the lives of two unhappily married couples intertwine, the result is chaos. This convoluted, episodic comedy-drama from Robert Altman-protege and long-time associate Alan Rudolph follows their mutual journey. The union between Lucky "Fix-It" Mann (Nick Nolte) and his beautiful wife Phyllis (Julie Christie) has never been the same since the night their daughter overheard a particularly bitter argument between them and fled the house forever. A former low-budget movie actress, Phyllis is depressed and spends much of her time gazing wistfully at her old films and mooning over her happy past. She and Lucky haven't touched each other in ages. The same holds true for fast-track corporate executive Jeffrey Byron (Jonny Lee Miller and his wife Marianne (Lara Flynn Boyle). Marianne desperately wants children and needs affection, but the job-obsessed Jeffrey refuses to satisfy her. The two live in a fabulously appointed duplex. One day they hire a handyman to make routine repairs and in walks handsome Lucky. Marianne is instantly attracted to him and they begin a passionate affair. Meanwhile, Jeffrey meets the worldly Phyllis and they too begin an adulterous tango. The illicit love stories crisscross for a time but reach their denouement when all four accidentally meet in a posh Montreal hotel bar.

Ellen David
as Judy the Waitress

Don Jordan
as The Byrons' Concierge

John Dunn-Hill
as Derelict in Park

The actors deliver their lines with stark and declamatory fervor, and their gestures have a sharp, sculptural stillness that's reminiscent of the grand artifices of classic-Hollywood productions.

The still strkingly beautiful Julie Christie renders such as glowing performance that she alone justifies viewing this incurable, frivolous romantic serio-comedy in which she plays B-Movie actress!

How mysterious and intriguing some performances can be.

Christie is a revelation, a lilting, charming schemer ... She alone is reason enough to see this flawed and haunting film.

Will turn off viewers before they arrive at scenes in the final third of this movie that make the previous, tedious parts forgivable.

Afterglow plants a cynical seed in its provocative examination of isolation, arbitrary emotional fulfillment, and marital stagnation. Christie dutifully fills the shoes of a wounded woman so convincingly

In exploring the breakdown of two marriages, Alan Rudolph returns to his anatomy of the dynamics of intimacy.

As a showcase for Nolte and Christie -- especially Christie -- it's splendid, and carries an emotional punch right to the bitter end.

Afterglow This movie is another from a long list of movies that played at the 1997 Tronto Internatinal Film Festival. Not one of the best from that list, but still worth watching. This movie was filmed in Montreal Canada and Nick Nolte is a handyman who is fixing more then minor repairs in his travels. His wife ( Julie Christie) is a burned out actress who had a child by another actor while married to Nick, of course one day during an arrugment she brings up the fact that the child who is now 15 is not his, major mistake child hears runs away and so is the story line of our film. Nick is not giving it up to his unfaithful wife in 3-4 years but is screwing all his clients.Of course one client falls in love with him. All in all its not that trashy and has its moments but I can only give it 3 stars

Julie Christie is radiant as the wronged wife easily outshining the rest of cast. It's a pity she doesn't work more but it makes each time she does something special.

I was expecting this to be a little more interesting to be honest. This partner sharing story is unique in that it is set in Montreal which is not taking the place of a U.S. City but I was expecting fabulous...not just a welcome diversion for a few hours. Go in expecting little and be nicely surprised, not the other way around.

[font=Century Gothic]In "Afterglow", Jeffrey Byron(Jonny Lee Miller) is a young executive who enjoys taking breaks walking on the ledge of his building. His wife, Marianne(Lara Flynn Boyle), is ovulating and desperately wants to get pregnant but Jeffrey is not obliging. Luckily, she still needs some work done on her home which requires a handyman, Lucky(Nick Nolte), who was recommended to her. Aside from repairing homes, Lucky also seems to be having sex with most of the housewives in the greater Montreal area, with the exception of his own wife, Phyllis(Julie Christie), a former B-movie actress.(Apparently, they have an open marriage under which Lucky can have sex with other women, just as long as he sleeps in his own bed.)[/font] [font=Century Gothic][/font] [font=Century Gothic]"Afterglow" is a very uneven movie about consequences and how women are taken for granted in our society. But there is little real drama to speak of and the extraneous subplots do not help. Luckily, writer-director Alan Rudolph's horrible comedic instincts do not come into play. Nick Nolte has rakish charm to spare and Julie Christie does an excellent job in deftly avoiding playing a caricature. Lara Flynn Boyle starts out at awful but gets better as the movie goes on. Jonny Lee Miller simply comes off as flat.[/font]