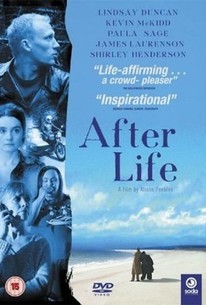 When journalist Kenny Brogan (Kevin McKidd) tries to jump start his career by interviewing a doctor who may be involved in an assisted suicide clinic, he doesn't realize that his rise to the top could be halted by dying family members of his own. His mother, May (Lindsay Duncan), reveals she has ovarian cancer, and Brogan could potentially be burdened with the care and feeding of his mentally impaired sibling. Directed by Alison Peebles, Afterlife also features Shirley Henderson, Paula Sage, James Laurenson, Fiona Bell, Julie Austin, and Antony Strachan.

Lindsay Duncan
as May Brogan

Laura Pearson
as Journalist
View All

Extremely well written, acted and filmed with edgy life and humour that keeps it from turning mawkish.

Rich Cline
Shadows on the Wall
View All Critic Reviews (3)

There are no featured audience reviews yet. Click the link below to see what others say about AfterLife!