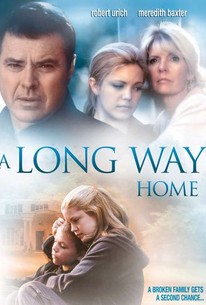 An abusive father returns home to beg forgiveness from his estranged wife and daughter, both of whom must struggle to summon the courage needed to grant him reprieve for his past indiscretions. His violent tendencies ripped his family apart, but now Jack (Robert Urich) has learned to control his rage. Today the one thing Jack wants most is to reunite his family. But forgiving Jack won't be easy, because his wife Carol (Meredith Baxter) and their daughter Samantha still bear the psychological scars of their turbulent past. Only by remembering what drew her to Jack in the first place will Carol find the courage to give him a chance to redeem himself, and discover the unconditional love that's has the power to transform lives.

Michael Wayne
as Will

Kristin Woodburn
as Rain
View All

There are no critic reviews yet for Aftermath (A Long Way Home). Keep checking Rotten Tomatoes for updates!

There are no featured reviews for Aftermath (A Long Way Home) at this time.