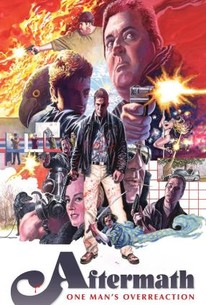 Aftermath is a black comedy thriller about one man's enormous overreaction. Thomas Fiorini (Hall) is a successful developer and an upstanding member of the community. He has it all: money, a stunning wife (Rohm), and their first child on the way. But the good times come to a screeching halt when Tom's lead foreman Matt (Jamie Harrold) and subcontractor Tony (Penn), start to compete for top position in the company. After a physical fight with Tony, Matt mysteriously disappears and Tom, fearing the worst, fires Tony. What follows is a slippery spiral of confrontations and suspicions as Tom becomes increasingly paranoid. Step by step he moves in a direction of fear leading to meetings with a top hit man (Danza) and a cast of unsavory characters. (C) Freestyle Releasing

Clark Middleton
as Man in Wheelchair

The result is a bit of a patchwork, one that's often clever, other times convoluted, but always watchable - if only to see what might happen next.

The crime melodrama, whch its makers have dubbed a 'black comedy thriller,' has a few oddball moments but is never funny, and it certainly isn't thrilling.

There are no featured reviews for Aftermath at this time.