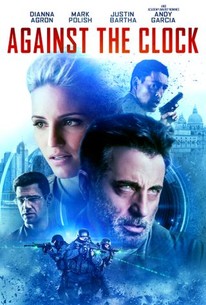 Against the Clock Videos

Against the Clock Photos

After CIA Agent, Kelley Chandler (Mark Polish) is seriously injured during a mission, his wife, Tess (Dianna Agron, "Glee"), a former CIA operative, becomes determined to find out what happened - a truth the CIA Director (Oscar (R) nominee, Andy Garcia) wants concealed at all cost. Written and Directed by Polish and also starring Justin Bartha (NATIONAL TREASURE), the film is a high-suspense conspiracy spy-fi thriller that forces Tess and Kelley to tackle both mental and physical extremes to uncover the truth.

James Frain
as Dr. A

Critic Reviews for Against the Clock

[W]hile this movie is pretty incomprehensible, it's at least memorable.

Audience Reviews for Against the Clock

There are no featured audience reviews yet. Click the link below to see what others say about Against the Clock!

Against the Clock Quotes