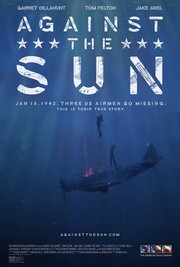 Against The Sun Reviews

Against The Sun gives you an inside look at what it could take to survive in a raft out in the middle of the ocean for an extended period of time. In this case, for 34 days they were stuck in a raft after crashing their plane in the ocean.

Very well acted and the pace keeps you intrigued through the entire story. Very well done!

Serge L
April 17, 2017
Real story made to film, realistically. Very good reenactment with excellent effects, make-up, and decent acting. We can feel the time passing. But they had it easy, with a dingy that floated and two episodes of rain and fishes to eat.

Iain B
February 20, 2017
How do you make the true story of the monotony of being lost at sea interesting and entertaining... And should you? This just about does it

A castaway film based on the true event of the US navy airmen who crash landed their plane and lost in the sea during the WWII. The story is set when the US response to the Pearl Harbor attack was underway. But three men are unfortunate to end at a vast pacific ocean. The film tells their survival story without food, water and medical attention until they plan to sail to the nearest island.

There are many awesome films were in the recent times with this theme, so it looks like people are already tired of it. But I enjoyed it, I never get bored of listening to the true adventure stories like this. You know it is a low budget film with a minimal cast, but production quality was excellent. The amazing effort by all the three, especially towards the final act with their diet to match with the real event.

Draco Malfoy, the bad boy from the 'Harry Potter' film series was very interesting. I never noticed him as close as in this one, because he never did a big role until now. So I hope he makes some fine roles in his future projects.

In the B movies, this is really a top notch product. There are only minor flaws, and the scenes repeated from other similar films, because these things are very common in the castaway situation. So you can't blame the film for being so cliche, but you can try to appreciate the attempt.

By the way, it's got a small twist at the end. It was the editing magic, otherwise if the story was told in a straight line from the beginning to the end, there would have been nothing but a usual tale. Now, do you think I would recommend it to you, definitely I do.

Scot W
May 7, 2016
Watch the first 5 minutes and last, along with the ending credits (for the real pics) and you'll have added an hour to your life.

Chris R
½ December 11, 2015
True story and one I hadn't heard before. Definitely worth the watch.

Jax R
½ November 18, 2015
Another one to judge for yourself. I thoroughly enjoyed it.

Lanky Man P
½ November 10, 2015
Such an amazing, strong powerful film of nothing but pure courage.

Kevin L
September 23, 2015
Just like the first half of Unbroken but American Fliers and no Japanese Prison Camps.

Dave H
June 11, 2015
Loved it! I didn't expect it to hold my attention throughout, but it was quite an inspirational movie. I thought each of the men played their parts genuinely. They made me believe the struggles that these 3 men endured. Hard to imagine it's a true story. What a nightmare this would be.

Nathan M
May 12, 2015
Featuring strong performances from its three leads, #againstthesun is an average "against the odds" film that is hindered only by its weak direction.

Eric O
½ February 9, 2015
definitely (and surprisingly) one of the better 'lost at sea' films in a while...and there's been a lot of them (Cast Away, Open Water, Captain Phillips, The Deep, The Disappeared, Life of Pi, The Reef, Kon-Tiki, All Is Lost, Unbroken)

Donna L
½ February 2, 2015
Kept me interested from the beginning to the end. Well done.

Rachel G
January 29, 2015
Compelling performances and a great story. I recommend it!

Lincoln K
January 25, 2015
Yes this is a film I worked on so i'm a bit biased... but the film is better than I had expected it to be.. The low budget is obvious, especially in the shark attack sequence (which was done by Spin, not be us).. but the actors are good and they keep you involved in the survival quest... It's unfortunate that the bigger budget Unbroken came out so recently.. but its still a good enough movie.
Page 1 of 2