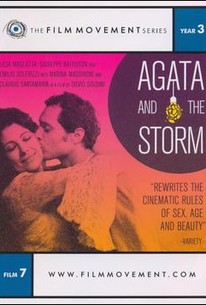 Agata finds out that her brother, Gustavo, isn't really her brother after all. She decides to follow him to a small strange town where Romeo, Gustavo's real brother, lives. Agata owns Genoa's best book store, a place where the staff dispenses the merchandise as if it was balm for the soul. Repeat customer Nicola, a handsome married man, falls for Agata and an explosive affair ensues. Meanwhile, the discovery that he was actually adopted leads Agata's architect brother Gustavo to a life crisis of his own. Gustavo learns the truth from his younger half-brother Romeo, a talented clothing designer and incorrigible womanizer. As the emotional storm brewing in her own life upsets her self-reliance, Agata sees the surge of her feelings mirrored in nature.

Soldini has yet again crafted an escapist fantasy that works. You even forgive him for making it last two hours.

It's a sweet film and lots of fun...Aspiring to be Italy's answer to Like Water for Chocolate in the romantic magic realism stakes.

Agata(Licia Maglietta) owns a book store where she shares her love of literature and younger men. Her brother Gustavo(Emilio Solfrizzi) is an architect whose travels for work supply his son with a colorful variety of t-shirts to wear at school. Romeo(Giuseppe Battiston) is a dreamer whose mother has just died. That's when he learns that Gustavo is his half-brother which comes as an even larger surprise to Gustavo. "Agata and the Storm" has to be one of the most random movies I have ever seen which could change again by next week. Story and character elements, including the very odd bit of magic realism, float in all directions, never really able to connect with each other. Some of which has to do with family; others not so much. But it is hard to hate on a movie that is so amiable and that shows so much love for literature. Plus, I know how to pronounce Kierkegaard correctly now.