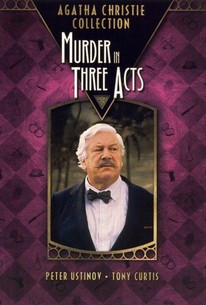 Agatha Christie's Murder in Three Acts represents Peter Ustinov's fifth appearance as Dame Agatha's brilliant, insufferable Belgian detective Hercule Poirot. The scene is Acapulco, where retired actor Tony Curtis hosts two separate parties--both of them were blighted by the fatal poisoning of a guest. The police think the butler did it (honest!), but Poirot activates his "little grey cells" to pinpoint the killer amongst a group of wealthy and eccentric suspects. Filmed in Mexico, Murder in Three Acts was the latest (and to some reviewers the least) in a long line of Agatha Christie TV-movie specials produced by Stan Marguiles. Ustinov was Poirot in three of these, having first essayed the role in the theatrical feature Death on the Nile (78).

There are no critic reviews yet for Agatha Christie's 'Murder in Three Acts'. Keep checking Rotten Tomatoes for updates!

There are no featured reviews for Agatha Christie's 'Murder in Three Acts' at this time.