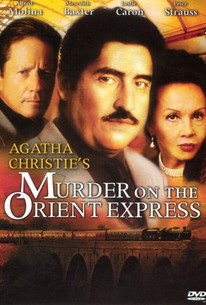 Previously filmed by director Sidney Lumet in 1974, Agatha Christie's classic mystery novel Murder on the Orient Express was updated from the 1930s to the early 21st century in this made-for-TV remake. To be sure, the ineffable, insufferable Belgian detective Hercule Poirot (here played by Alfred Molina) uses his own "little grey cells" to solve the train-compartment murder of a ruthless American business executive (Peter Strauss). This time around, however, Poirot is not averse to relying upon computer technology to speed up his investigation; in the same vein, the murder victim has been updated (or perhaps, upgraded) from an industrialist to a software tycoon. Still, Christie's surprise ending (which should be no surprise at all to fans of the 1974 film) remains intact, as does Poirot's ultimate decision to let his heart rule his head. Murder on the Orient Express first aired April 22, 2001, on CBS.

Critic Reviews for Agatha Christie's Murder on the Orient Express

... I found myself surprisingly absorbed, even though I've known whodunit since I was prenatal.

Audience Reviews for Agatha Christie's Murder on the Orient Express

Hercule Poirot has a laptop!? NO! Agatha Christie is so lucky to be dead!