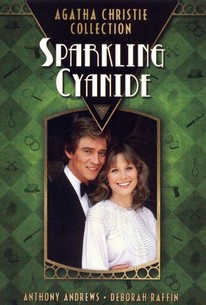 Scriptwriters Robert Malcolm Young, Sue Grafton and Stephen Humphrey transposed the Agatha Christie story Sparkling Cyanide from its veddy British locale to the plush environs of Pasadena for this 1983 TV-movie adaptation. Leading character Anthony Andrews is still a Briton, mingling with the rich and famous. Seeking glamour, Andrews finds only depravity and death as several of the glitterati drop dead due to poisoned champagne. The motives are the oldest and most reliable: avarice and jealousy. Sparkling Cyanide was filmed at the same time as Caribbean Mystery, another Christie adaptation utilizing the same producer, director and scenarists.

Eric Sinclair
as Charles
View All

There are no critic reviews yet for Agatha Christie's 'Sparkling Cyanide'. Keep checking Rotten Tomatoes for updates!

There are no featured reviews for Agatha Christie's 'Sparkling Cyanide' at this time.