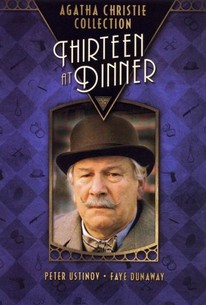 Thirteen at Dinner is a made-for-television movie adaptation of the Agatha Christie murder mystery, starring Peter Ustinov as Hercule Poirot. In this film, Poirot investigates the murder of a British lord, discovering that the lord's American widow (Faye Dunaway) is an actress who believes that another woman has been impersonating her.

Geoffrey Rose
as Duke of Merton

Jean Sincere
as Ellis the Maid

David Frost
as Himself
View All

There are no critic reviews yet for Agatha Christie's 'Thirteen at Dinner'. Keep checking Rotten Tomatoes for updates!

There are no featured audience reviews yet. Click the link below to see what others say about Agatha Christie's 'Thirteen at Dinner'!