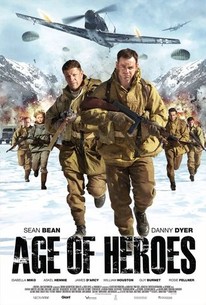 Today, many remember Ian Fleming (1908-64) as the author of such books as the James Bond series and Chitty Chitty Bang Bang, but less-commonly known are the details of his involvement in World War II. Fleming began as an intelligence liaison under the aegis of Rear Admiral John Godfrey, and then in 1942 formed a crack team of intelligence-based commandos, known as the 30 Assault Unit; its job involved operating near the front lines of battle to seize top-secret documents from enemy headquarters that had been targeted in advance. As directed by Adrian Vitoria, the period saga Age of Heroes dramatizes the 30 Assault Unit's wartime adventures. The cast includes Sean Bean, Danny Dyer, Rosie Fellner and Aksel Hennie. Vitoria co-authored the script with Ed Scates.

Guy Burnet
as Riley
View All

Critic Reviews for Age of Heroes

The gruelling training, clandestine mission and sacrifice is familiar Boy's Own stuff but the lack of a decent budget really hurts the film.

Dyer has forged a career around screen violence which can leave a very unpleasant aftertaste. But this is a relatively conventional Second World War story about seizing Nazi radar technology from occupied Norway and he's all the better for it.

This film's shoestring budget is just far too apparent, making it impossible to take seriously. But it has its moments.

Bean and Danny Dyer butt heads in an engaging manner, and the icy locations add an atmospheric backdrop.

Audience Reviews for Age of Heroes

A guns-blazing and riveting action-packed adventure of real-life heroes of Author, Ian Fleming`s commando unit in world war 2. An exceptional first chapter to a promising trilogy of the units adventures. An explosvie, thrilling and dazzling action flick. Sean Bean and Danny Dyer give strong and compelling performances.