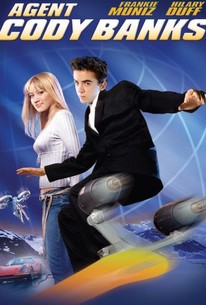 Critics Consensus: Should satisfy young teens, but offers nothing new for those who are familiar with the formula.

Critics Consensus: Should satisfy young teens, but offers nothing new for those who are familiar with the formula.

Critic Consensus: Should satisfy young teens, but offers nothing new for those who are familiar with the formula.

To his family and friends, Cody Banks is a typical teen--he loves to skateboard, hates math, and feels like a complete idiot around girls. But Cody's got a secret--he's actually part of a secret teen CIA program. Cody's living every boy's dream life--he can drive like a stuntman, has an incredible arsenal of cool gadgets, and his agency mentor, Ronica Miles, is totally hot. But Cody's training is put to the test when he's sent to pose as a prep school student and befriend fellow teen Natalie Connors in order to gain access to her father--a scientist unknowingly developing a fleet of deadly nanobots for the evil organization ERIS. From runaway cars and high-speed snowboard chases to a spectacular final mountaintop showdown, Cody has to use everything he's learned to prove himself as an agent and stop ERIS from completing their mission--and, maybe, even get the girl.

Three Spy Movies You Can Watch with Your Family Instead of Red Sparrow
Now Streaming: Kingsman: The Secret Service, Focus, and More
Lily Tomlin and Jane Fonda Talk Grace and Frankie

Only a kid could love it, but they do.

Never quite as funny as it could have been, Agent Cody Banks is nevertheless far too genial to dislike.

As such, it's not too bad. Sure there's an over-familiarity at this point in regards to secret agent teenagers, but Muniz is such an affable presence I can honestly say I was reasonably entertained much of the way.

Agent Cody Banks has a TV movie feel to it. The special effects are kind of hokey, the jokes pretty lame and the stunts looked like they're performed by stunt performers.

Agent Cody Banks provides the kind of high-quality entertainment one would expect in an adult action adventure that is expected to rake in major bucks.

I have a feeling Muniz could have done much more with this role under the right director and with a better script.

The Bond films never feel dated, and neither does Agent Cody Banks. It still plays well, and for that credit the special effects that compare favorably to today's films and the fact that high school never seems to change.

Muniz and Duff seem to be two perfectly normal teenagers thrown in the midst of an elaborate fantasy, and they pull it off beautifully.

A bland and condescending adaptation of an adult action film for a younger audience.

The movie is bouncy and colourful, and cheesy in a nice way, but it outstays its welcome in the last half hour.

Quirky and fun! A good film!

I loved this in my younger days, it served as an appropriate "James Bond" for tweens. That's all it really has though.

A great action movie for all ages :)