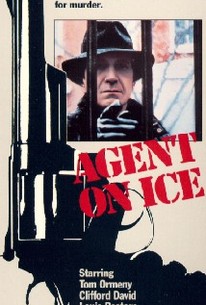 The CIA plays footsie with the Mob in Agent on Ice. Secret service boss Clifford David conspires with Mafia chieftan Louis Pastore in a plot to assassinate "inconvenient" political leaders. Young CIA operative Tom Ormeny, who has no inkling of David's plan, is ordered to kill Pastore-who, as it turns out, isn't killed at all. Set up as a fall guy, Ormeny is disgraced and fired from the service. His only hope for redemption is to prove that Pastore is still alive, still doing the CIA's dirty work. Though partially set in Europe, Agent on Ice was filmed entirely in New Jersey-and looks it. John Pastore, who plays the "assassinated" Mafia boss, also produced the film.

Critic Reviews for Agent on Ice

There are no critic reviews yet for Agent on Ice. Keep checking Rotten Tomatoes for updates!

There are no featured reviews for Agent on Ice at this time.