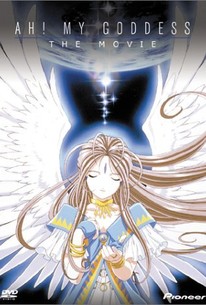 This feature-length sequel to the acclaimed animé series Aa! Megamisama! takes place two years after the conclusion of the original story. The goddess Belldandy is still in love with science student Keiichi, and all seems well in the world. But there's trouble looming on the horizon -- Celestin, who mentored Belldandy, went mad and tried to destroy the goddess network. Celestin's chicanery resulted in a long stay in prison, but now he's back, and has decided to spoil Belldandy's apparently perfect life by wiping out all of her memories of Keiichi. Can Belldandy still love a man she no longer knows anything about, or will her pure heart help her save the day? Ah! My Goddess: The Movie was released in North America in two forms -- an English-dubbed version, and another edition in the original Japanese with English subtitles. ~ Mark Deming, Rovi

Critic Reviews for Ah! My Goddess - The Movie

There are no critic reviews yet for Ah! My Goddess - The Movie. Keep checking Rotten Tomatoes for updates!

Audience Reviews for Ah! My Goddess - The Movie

Very beautiful and I love the ideas it presents, especially Heaven being like a huge mainframe or computer network. However, I hadn't seen the series before this, and so it took me a while to actually grasp what was going on. I think I'll go back and watch the series (and possibly read the manga) before viewing this again and see if I appreciate it more afterwards.

Ah! My Goddess - The Movie Quotes