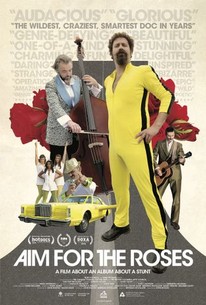 AIM FOR ROSES is a one-of-a-kind film, about a one-of-a-kind album, about a one-of-a-kind stunt, all three of which could only happen in Canada. It blurs the lines between pathos & kitsch, and dignity & absurdity, through a barrage of original interviews, archival footage, dramatic recreations and musical numbers. It celebrates the beauty and the terror of making a living as a composer and as a stuntman. It's for highbrow fans of the contemporary avant-garde and lowbrow fans of 1970s Canadian hoserdom. (Think: Errol Morris & Philip Glass meet Super Dave Osborne.) It shows and tells two very different stories, about two very different men, at two very different crossroads in their lives, both of whom risked it all to make "the ultimate statement".

Critic Reviews for Aim for the Roses

Bolton's confluence of highbrow and lowbrow elements is inelegant at times, but also the basis of this film's untidy appeal.

Comparisons to Joshua Oppenheimer's The Act of Killing are both inevitable and warranted for the film's ingeniously playful approach to documentary form, but there has never been a doc quite like Aim for the Roses.

A tale so bizarre it can only be true, Aim for the Roses tells the story of two men with a soft spot for gonzo spectacle.

Director John Bolton splits him time in this documentary between the story of Carter's big jump and the tale of the Haney's opus. Each story is fascinating in its own way.

There are no featured reviews for Aim for the Roses at this time.

Aim for the Roses Quotes