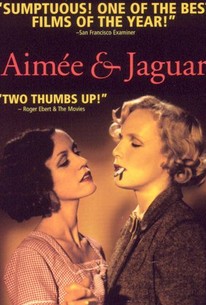 Critics Consensus: A gripping examination of sexual taboos, set against the backdrop of Nazi Germany, bolstered by a subtly shaded script and a strong cast.

Critics Consensus: A gripping examination of sexual taboos, set against the backdrop of Nazi Germany, bolstered by a subtly shaded script and a strong cast.

Critic Consensus: A gripping examination of sexual taboos, set against the backdrop of Nazi Germany, bolstered by a subtly shaded script and a strong cast.

Based on a true story, Aimée & Jaguar is a love story and historical drama about a liaison both forbidden and dangerous. Set in Berlin during World War II, Aimée & Jaguar tells the story of Felice (Maria Schrader), a reporter with a Nazi newspaper who has two secret lives. Felice is actually a Jew who smuggles classified documents to underground forces working against Hitler; she's also a lesbian who spends her nights in gay clubs with her lover, Ilse (Johanna Wokalek). Ilse works as a maid for Lilly (Juliane Kohler), the wife of a Nazi soldier with four children and a handful of male lovers. Felice meets Lilly and is immediately attracted to her. As Germany begins to lose ground to Allied forces, Felice becomes bolder in her work with the underground. Similarly, Felice's feelings for Lilly grow, and one day she kisses her on a reckless impulse, to discover that Lilly is drawn to her as well. A passionate romance blooms between the two women as Nazi forces begin to crumble and Felice courts danger at every turn. This handsomely staged production was the feature-film debut from director Max Faerberboeck, whose previous credits include extensive stage and television work.

A vivid slice of life -- and love -- during the 1944 Allied bombardment of Berlin.

The film ... isn't up to the complexities the story raises, but it's a consistently engrossing piece of work.

With a solid support cast, this is always an engaging and moving drama.

This is more than a same-sex success, it's a most affecting, most sensual on-screen love affair, period.

A well acted, sensual tale of lesbian romance set against the tumultuous setting of WWII and the Holocaust.

It's a breathtakingly beautiful film, never mawkish, never less than vibrantly real and never more affecting than when it explores the nature of a love that 'dare not speak its name', not in Nazi Germany

Startlingly poignant, Aimée and Jaguar is a story about dreams. If you have ever dreamed, don't miss it.

Theatre director Max Färberböck could hardly have picked a more intense and heartbreaking story for his cinema debut.

i really liked this movie. Another one of my Library Media finds.