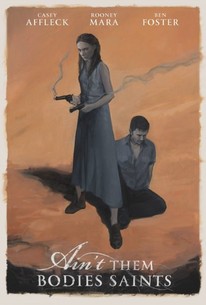 Critics Consensus: While conventional in plot, Ain't Them Bodies Saints is a visually poetic film that pays homage to the New Hollywood directors of the 1970s and promises big things from director David Lowery.

Critics Consensus: While conventional in plot, Ain't Them Bodies Saints is a visually poetic film that pays homage to the New Hollywood directors of the 1970s and promises big things from director David Lowery.

Critic Consensus: While conventional in plot, Ain't Them Bodies Saints is a visually poetic film that pays homage to the New Hollywood directors of the 1970s and promises big things from director David Lowery.

Set against the backdrop of 1970's Texas Hill Country, AIN'T THEM BODIES SAINTS is a romantic American story that follows three characters on various sides of the law - outlaw Bob Muldoon (Casey Affleck), his wife Ruth Guthrie (Rooney Mara), and a local sheriff named Patrick Wheeler (Ben Foster), who gets caught in their crosshairs. The film, which is the second feature from writer-director David Lowery, was developed at the Sundance Institute's Writing and Producing Labs and also stars Nate Parker and Keith Carradine. The film received the U.S. Dramatic Cinematography Award at the 2013 Sundance Film Festival. (c) IFC

Rami Malek
as Will

Will Beinbrink
as Lt. Townes

The problem with the film, written and directed by David Lowery, is that it's tepidly drawn, with molasses-like pacing and an anticlimactic ending that does little to keep the audience invested.

It's one of the best films of the year, and its shrugging Malick comparisons should be taken with a grain of salt - particularly for those of us whose admiration of the man is held with some reservation and qualification.

Like a bastard love child of Terrence Malick and Robert Altman, David Lowery's crime drama shuffles to its own drummer.

The astute use of folk and bluegrass defines the palette of this film as much as the acting or the cinematography.

Lowery falls back on a number of clichés in his indie romance-cum-Western, drowning the actors in melancholy sunshine and letting them mumble like mad. What he gets right are the characters.

Everything is relentlessly grim and dour without earning the weight to make that mean something.

Somehow, everything in the movie feels forced. [Full Review in Spanish]

A homage to American cinema of the brown era, one that has many beautiful parts that don't add up to an interesting whole.

Ain't Them Bodies Saints is sparse and slow. It's dusky palate and hazy, starcrossed-outlaw-fairy-tale mannerisms will come off as pretentious affectations to those not gripped by paralyzing emotional attachment.

His film has a poetic feel, it's a fully realised imaginary world, but it is a fictional world that we know mainly from other films.

With Ain't Them Bodies Saints, Lowery has all the pieces to the puzzle, but just can't put them together like the master can, though his creation is undeniably beautiful in its own right.

A sad, melancholy Bonnie & Clyde-like crime drama that clearly borrows from Malick, and it is nice to see the way that Lowery approaches his narrative even if it is quite conventional and worth seeing more for its strong performances than by what he actually wants to tell.

Dark and lyrical to a fault, Ain't Them Bodies Saints is an exercise of style over substance, but is elevated by fantastic performances from Casey Affleck, Rooney Mara, Ben Foster, and Keith Carradine. The tone of this western sets up a tragic story about consequences and family as an outlaw tries to make it home to his family, and that hopelessness is reflected in the (now cliche) backdrop of a rural Texas setting.

Simple, beautiful and achingly tender. Very good Film! Good story which needs some touching up, but the acting is first rate. It is a character study, a study in melancholy told in real, human terms and not in movie terms. And maybe that is its only flaw, that truth be told, real life is less dramatic and more grimy than make-believe. This is another triumph for Rooney Mara who is excellent as a strong, young woman who desires a better life and a man who can't get it for her. There's great irony in the way events turn out for her and it's all totally believable. I was also impressed with Casey Affleck's performance as her lover and small time criminal. Perhaps the film veers too closely at times toward stylish vagueness and too far from the broken heart of the story. But there is no denying this is a serious, authored work of art. The tale of an outlaw who escapes from prison and sets out across the Texas hills to reunite with his wife and the daughter he has never met.