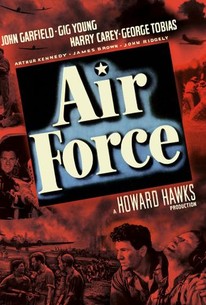 On December 6, 1941, a squadron of nine B-17 bombers takes off for Hickam Field, HI. The crew of the Mary Ann, including two new men, assistant radio man Private Chester (Ray Montgomery) and gunner Sergeant Joe Winocki (John Garfield), assembles for the flight, and in the first 20 minutes, the movie reveals certain things about the crew: the shadowy past of one, the mother of another, and the wife of a third; two of them are good friends with the sister of McMartin (Arthur Kennedy), the bombardier, who lives in Honolulu; the son of the senior member of the crew, Sgt. White (Harry Carey Sr.), is a pilot stationed at Clark Field in the Philippines. Then more characters make entrances: the aircraft commander Quincannon (John Ridgely); Weinberg (George Tobias), a Jewish mechanic from New York; and a man from a farm in the upper Midwest -- they all represent a broad cross-section of America as it saw itself, and the "regular guys" in the Army Air Force as it existed in 1941. The flight proceeds without incident. Winocki, an embittered, washed-out flight school candidate who accidentally killed another pilot, is about to leave the service when the weather report from Hickam Field is interrupted, and the radio man begins picking up transmissions in Japanese. The Mary Ann and the rest of the squadron fly right into the middle of the Japanese attack on Pearl Harbor unarmed and out of gas, and nearly crack up landing on an emergency field; no sooner do they make repairs than the crew comes under attack, and the plane takes off and makes for Hickam Field, which they find a flaming shambles. They fly on to the Philippines, stopping at Wake Island just long enough to meet a few members of the doomed Marine garrison, taking their company mascot, a dog, with them. At Clark Field, the Mary Ann and her crew finally go into action against the enemy, flying in alone against a Japanese invasion force; Quincannon is mortally wounded in the brief action, which leaves the plane damaged seemingly beyond repair. The remaining crew won't give up the plane, however, even when ordered to abandon and destroy her; they get the bomber off just ahead of the advancing Japanese, and survive to help bring retribution to the invading fleet and the Japanese empire. ~ Bruce Eder, Rovi

James Millican
as Marine with dog

Leah Baird
as Nurse No. 2

Although it draws about the longest and most pliant bow that has ever been drawn in the line of fanciful war films and goes completely overboard in the last reel, it is still a continuously fascinating, frequently thrilling and occasionally exalting show.

Howard Hawks finds a perfect vehicle for his study of the male group. William Faulkner polished the dialogue, but as a silent it would still be tremendously exciting and evocative.

I cannot be sure how I feel about Air Force. It is loud, loose, sincere, violently masculine, and at times quite exciting.

Air Force can't escape the shadow of its own jingoism. Its point wasn't just to inspire an American public but to make monsters of its enemies. It did so with chilling efficiency.

A cheery bit of war propaganda that feels cringeworthy today, in which American soldiers seem extraordinarily giddy about the prospect of near-certain death, coupled with some terrible special-effects miniatures.

The versatile Howard Hawks combines personal experience and knowing skills in directing this enjoyable WWII propaganda movie, which was nominated for four Oscars, winning one for editing.

Gritty, emotional actioner made at height of WWII. Strong cast.

All of director Howard Hawks' skills are on display in this exciting, crackerjack WWII film.

For a propaganda film, this one is superior.

It isn't one of the director's most impressive outputs, but when a solid genre entry such as this is one of your "lesser" films, it says a lot about the quality of your work.

There are no featured audience reviews yet. Click the link below to see what others say about Air Force!