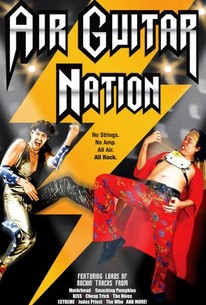 Critics Consensus: It's up for debate how serious or ironic its subjects are, but Air Guitar Nation is nonetheless a funny and exciting documentary with a killer soundtrack.

Critics Consensus: It's up for debate how serious or ironic its subjects are, but Air Guitar Nation is nonetheless a funny and exciting documentary with a killer soundtrack.

Critic Consensus: It's up for debate how serious or ironic its subjects are, but Air Guitar Nation is nonetheless a funny and exciting documentary with a killer soundtrack.

In this documentary from filmmaker Alexandra Lipsitz, the cameras roll to capture the fierce competitive spirit that defined the first annual U.S. Air Guitar Championship. Staged in Finland and featuring some of the fastest-fingered shredders on the planet, the U.S. Air Guitar Championship would bring a hobby once contained to the bedroom directly into the spotlight for all to enjoy. Featured jam sessions and interviews with both the performers and their "airhead" groupies offer a humorous look at an unlikely competition driven by pure showmanship. ~ Jason Buchanan, Rovi

There must be better, more useful ways of amusing themselves but obviously none which would allow them to strut the stage to the plaudits of a baying crowd like latter-day rock stars.

Like most guitar solos, the film doesn't quite know when to quit.

Despite the film's admirable brevity it's still hard to maintain a wry ironic grin for a full 81 minutes.

Shot in a raw, grungy style that lends the film a degree of authenticity, AGN is a riff-roaring experience that rarely hits a bum note.

A nuts-and-bolts document of the annual Air Guitar World Championships which take place in the rural outpost of Oulu in Finland.

It isn't so much the battle of the one-man-bands that is so compelling, as the journey itself, as sublime as it is ridiculous.

Put aside all of your preconceptions of air guitar as a hobby of shamelessly untalented wanna-be guitar players, and step into the world of competitive air guitar.

When a documentary is as entertaining as Air Guitar Nation, you have to ask if you really need it to have redeeming social value or to advance the art form in any way.

This raucously entertaining documentary about one of the silliest competitions on the planet actually has a serious message about the power of "airness" to change the world. Well, maybe.

While quite possibly the stupidest thing you've ever seen in your life, this documentary exploring the world of air guitar enthusiasts is a riot from start to finish.

Air Guitar Nation is insanely entertaining. Honestly, I put this movie off for a long time thinking that there was no way I was going to be entertained or at all care about air guitar. But it's really easy to like and actually dare I say respect what they are doing. C-Diddy and Bjorn Turoque are really likable in their own weird way and that's what makes the movie as they are the prime focus of the documentary. Some of the things the players say and so just make you laugh and then you see they aren't laughing and you think, "Wait, Are they serious?" To some extent they are, but the good thing is they only do it to have fun and I have to say it's a lot of fun to watch them.

On a scale between 4.0 and 6.0, I give it a 5.8! What an interesting film! This "mockumentary" film ranks up there with "Murderball" and "The King of Kong: A Fistful of Quarters", really defining this genre of movies at the top of the ranks. This is top-notch entertainment, you can't script better characters. If you haven't seen "C-Diddy" perform, then you're just missing out.

This is a really fun movie to watch. It starts with a ridiculous premise, but eventually wins you over with its exhuberance and, I hate to say it, skill. Some of the guys who compete are really quite accomplished in thier strange field and are pretty impressive to watch. This movie is like watching multiple love letters to rock music, if not guitar aptitude. It's too bad that Dan Crane kind of comes off as a bit desperate and pathetic. He's not too bad, but his tenacity makes him kind of a tragic character.

Terrific and funny. Had me giggling the entire time.