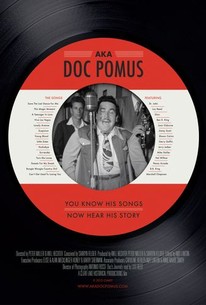 Paralyzed with polio as a child, Brooklyn-born Jerome Felder reinvented himself first as a blues singer, renaming himself Doc Pomus, then emerged as a one of the most brilliant songwriters of the early rock and roll era, writing "Save the Last Dance for Me," "This Magic Moment," "A Teenager in Love," "Viva Las Vegas," and dozens of other hits. For most of his life Doc was confined to crutches and a wheelchair, but he lived more during his sixty-five years than others could experience in several lifetimes. A.K.A. DOC POMUS brings to life Doc's joyous, romantic, heartbreaking, and extraordinarily eventful journey. In his later years, Doc was a mentor to generations of younger songwriters, and a fierce advocate for downtrodden rhythm and blues musicians. He wrote a thousand songs - including some of the most recorded songs in the history of popular music - but his most lasting gift may have been his uniquely generous spirit. "If the music industry had a heart," the record producer Jerry Wexler remembered, "it would be Doc Pomus."Packed with incomparable music and rare archival imagery, A.K.A. DOC POMUS features interviews with Doc's collaborators and friends, including Dr. John, Ben E. King, Joan Osborne, Shawn Colvin, Dion, Leiber and Stoller, and B.B. King. Passages from Doc's private journals are read by his close friend, Lou Reed. Doc Pomus' gripping life story makes for a powerful and lively film that introduces this unique American character to a new, much wider circle of admirers. (c) Official Site

News & Interviews for A.K.A. Doc Pomus

View All A.K.A. Doc Pomus News

Critic Reviews for A.K.A. Doc Pomus

A touching, delightful and exceptionally well-crafted new documentary, "AKA Doc Pomus" follows the life and career of Pomus, who wrote "Save the Last Dance for Me," "A Teenager in Love," "Viva Las Vegas" and scores of other hits.

Expertly put together by editor Amy Linton, "AKA Doc Pomus" uses its wealth of material to create the sense of a man with a genius for putting undistilled emotion into his songs.

A thoughtful, intimate documentary about a blues shouter, in the tradition of the great Joe Turner...

This static documentary portrait relies on the usual panning over photos and tag-team interviews, but the format, like the radio length of a song, doesn't get in the way of its subject's heart.

A moving, un-mawkish portrait of a songwriting icon.

Even if you know this history already, A.K.A. Doc Pomus is vital and endearing, a celebration of a great artist, a great character, and the universality of great pop.

[Doc] Pomus, much like friend and fellow New Yorker [Lou] Reed, didn't judge those who looked or felt like outsiders. He celebrated them. He spoke for them. He was one of them.

"A.K.A. Doc Pomus" gathers friends, collaborators, and, of course, the music to show just how big the talent and how much bigger the heart of an incredible artist.

The film leaves us with tons of great music and the lingering impression that Felder, aka Pomus, would have been a terrific person to hang out with.

Fascinating documentary about one of the greatest songwriters of the R&B and Brill Building eras of the 1950s and '60s.

Thrusts a forgotten pioneer back into the limelight while illuminating a part of rock history.

Audience Reviews for A.K.A. Doc Pomus

This absolutely gorgeous retrospect on perhaps one of the greatest song writers of all time. His personal struggles seem to drive the passion behind the lyrics and we learn of someone deeply loved and admired by all who came into contact with him.