Aladdin and the King of Thieves1995 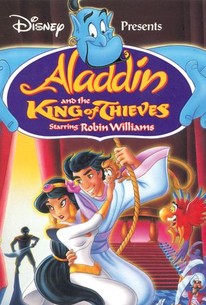 Aladdin and the King of Thieves Photos

In Disney's second straight-to-video sequel to Aladdin, Aladdin (voice of Scott Weinger) and Princess Jasmine (voice of Linda Larkin) have finally decided to marry, but when the big day finally arrives, the ceremony is thrown into chaos by the unexpected arrival of the Forty Thieves, who are searching for the enchanted Hand of Midas, a charm that will turn all it touches into gold. Aladdin makes the shocking discovery that his father (voice of John Rhys-Davies), long believed dead, is actually the leader of this infamous band of thieves, and when his father falls into peril, Aladdin must rescue him -- with the genie of the lamp (voice of Robin Williams) on hand to help. Robin Williams, whose voice work was considered a key factor in the success of the original Aladdin, returned to the franchise for this film after bowing out of the first sequel, The Return Of Jafar, due to a financial dispute (in The Return Of Jafar, the genie was voiced by Dan Castellaneta). ~Rovi

Critic Reviews for Aladdin and the King of Thieves

As the capstone to a franchise that never actually needed to be a franchise in the first place, it acquits itself tolerably well.

A reunion Aladdin fans will love.

Isn't involving enough to sustain interest when the Genie is offscreen.

...this time Robin Williams is coaxed back into the fold. Understandably, he saves what little day there is to save.

...a movie that happens before it thinks.

Audience Reviews for Aladdin and the King of Thieves

While this sequel didn't have the dynamite power of Jafar, it is overall a way better movie and sequel. The addition of the 40 thieves was such a cool concept to bring into the series. Also, it was way too cool to have Robin Williams back as Genie. This has a lot more action than either of the previous movies; concluding with an epic battle on a giant sea turtle with a crazy golden hand. It's simple; if you like Aladdin, you'll like this at least a little. It provides a nice conclusion to Aladdin and Jasmine; who's wedding was interrupted countless times.

Not my favourite walt disney classics but still a entertaining enough classic!

Aladdin and the King of Thieves Quotes